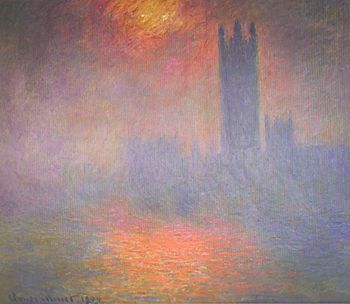 Claude Monet's painting of London smog in 1904. It was mainly caused by burning coal in homes and trains

Smog is a type of air pollutant; the word "smog" is a combination of smoke and fog. Classic smog results from large amounts of coal burning in an area and is caused by a mixture of smoke and sulfur dioxide.

London is where it first happened. Coal fires are now illegal in London, and trains are driven by other fuels. In cities like Los Angeles it is the exhaust fumes of cars which cause the smog.

Delhi is supposed to be the most polluted city on Earth. Smogs cause lung diseases and increase the death rate. According to one estimate, air pollution causes the death of about 10,500 people in Delhi every year.

Peking (Beijing) is another city where air pollution is serious. Car emissions and coal burning are the main reasons for their pollution. They also get pollution from some neighbouring regions, due to the pattern of air movement in the area.

All content from Kiddle encyclopedia articles (including the article images and facts) can be freely used under Attribution-ShareAlike license, unless stated otherwise. Cite this article:
Smog Facts for Kids. Kiddle Encyclopedia.