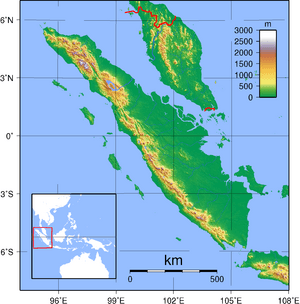 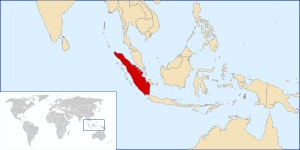 Sumatra is one of the Sunda Islands of western Indonesia. It is the largest island that is entirely governed by Indonesia and the sixth-largest island in the world at 473,481 km2 (not including adjacent islands such as the Mentawai Islands, Enggano Island, Nias Island, Simeulue Island, Riau Islands, Bangka Belitung Islands and Krakatoa archipelago).

Sumatra is an elongated landmass spanning a diagonal northwest-southeast axis. The Indian Ocean borders the west, northwest, and southwest coasts of Sumatra with the island chain of Simeulue, Nias, Mentawai and Enggano off the western coast. In the northeast the narrow Strait of Malacca separates the island from the Malay Peninsula, which is an extension of the Eurasian continent. In the southeast the narrow Sunda Strait, containing the Krakatoa Archipelago, separates Sumatra from Java. The northern tip of Sumatra borders the Andaman Islands, while off the southeastern coast lie the islands of Bangka and Belitung, Karimata Strait and the Java Sea. The Bukit Barisan mountains, which contain several active volcanoes, form the backbone of the island, while the northeastern area contains large plains and lowlands with swamps, mangrove forest and complex river systems. The equator crosses the island at its center in West Sumatra and Riau provinces. The climate of the island is tropical, hot and humid. Lush tropical rain forest once dominated the landscape.

Sumatra has a wide range of plant and animal species but has lost almost 50% of its tropical rainforest in the last 35 years. Many species are now critically endangered, such as the Sumatran ground cuckoo, the Sumatran tiger, the Sumatran elephant, the Sumatran rhinoceros, and the Sumatran orangutan. Deforestation on the island has also resulted in serious seasonal smoke haze over neighbouring countries, such as the 2013 Southeast Asian haze causing considerable tensions between Indonesia and affected countries Malaysia and Singapore. 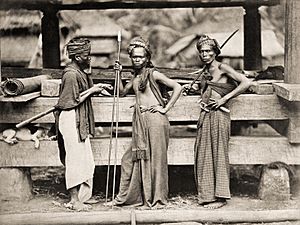 The Melayu Kingdom was absorbed by Srivijaya.

Srivijayan influence waned in the 11th century after it was defeated by the Chola Empire of southern India. At the same time, Islam made its way to Sumatra through Arabs and Indian traders in the 6th and 7th centuries AD. By the late 13th century, the monarch of the Samudra kingdom had converted to Islam. Marco Polo visited the island in 1292.

Ibn Battuta visited with the sultan for 15 days, noting the city of Samudra was "a fine, big city with wooden walls and towers", and another two months on his return journey. Samudra was succeeded by the powerful Aceh Sultanate, which survived to the 20th century. With the coming of the Dutch, the many Sumatran princely states gradually fell under their control. Aceh, in the north, was the major obstacle, as the Dutch were involved in the long and costly Aceh War (1873–1903).

The Free Aceh Movement fought against Indonesian government forces in the Aceh Insurgency from 1976 to 2005. Security crackdowns in 2001 and 2002 resulted in several thousand civilian deaths.

The island was heavily impacted by both the 1883 Krakatoa eruption and the 2004 Boxing Day Tsunami.

Sumatra is not particularly densely populated, with 123.46 people per km2 – about 58.5 million people in total (in mid 2019). Because of its great extent, it is nonetheless the fifth most populous island in the world.

There are over 52 languages spoken, all of which (except Chinese and Tamil) belong to the Malayo-Polynesian branch of the Austronesian language family. Within Malayo-Polynesian, they are divided into several sub-branches: Chamic (which are represented by Acehnese in which its closest relatives are languages spoken by Ethnic Chams in Cambodia and Vietnam), Malayic (Malay, Minangkabau and other closely related languages), Northwest Sumatra–Barrier Islands (Batak languages, Gayo and others), Lampungic (includes Proper Lampung and Komering) and Bornean (represented by Rejang in which its closest linguistic relatives are Bukar Sadong and Land Dayak spoken in West Kalimantan and Sarawak (Malaysia)). Northwest Sumatra–Barrier Islands and Lampungic branches are endemic to the island. Like all parts of Indonesia, Indonesian (which was based on Riau Malay) is the official language and the main lingua franca. Although Sumatra has its own local lingua franca, variants of Malay like Medan Malay and Palembang Malay are popular in North and South Sumatra, especially in urban areas. Minangkabau (Padang dialect) is popular in West Sumatra, some parts of North Sumatra, Bengkulu, Jambi and Riau (especially in Pekanbaru and areas bordered with West Sumatra) while Acehnese is also used as an inter-ethnic means of communication in some parts of Aceh province. 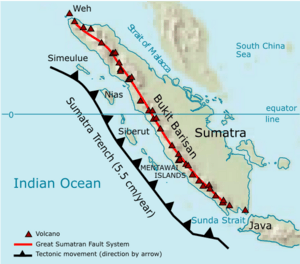 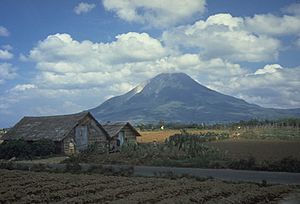 The longest axis of the island runs approximately 1,790 km (1,110 mi) northwest–southeast, crossing the equator near the centre. At its widest point, the island spans 435 km (270 mi). The interior of the island is dominated by two geographical regions: the Barisan Mountains in the west and swampy plains in the east. Sumatra is the closest Indonesian island to mainland Asia.

To the southeast is Java, separated by the Sunda Strait. To the north is the Malay Peninsula (located on the Asian mainland), separated by the Strait of Malacca. To the east is Borneo, across the Karimata Strait. West of the island is the Indian Ocean.

The Great Sumatran fault (a strike-slip fault), and the Sunda megathrust (a subduction zone), run the entire length of the island along its west coast. On 26 December 2004, the western coast and islands of Sumatra, particularly Aceh province, were struck by a tsunami following the Indian Ocean earthquake. This was the longest earthquake recorded, lasting between 500 and 600 seconds. More than 170,000 Indonesians were killed, primarily in Aceh. Other recent earthquakes to strike Sumatra include the 2005 Nias–Simeulue earthquake and the 2010 Mentawai earthquake and tsunami.

To the east, big rivers carry silt from the mountains, forming the vast lowland interspersed by swamps. Even if mostly unsuitable for farming, the area is currently of great economic importance for Indonesia. It produces oil from both above and below the soil – palm oil and petroleum.

Sumatra is the largest producer of Indonesian coffee. Small-holders grow Arabica coffee (Coffea arabica) in the highlands, while Robusta (Coffea canephora) is found in the lowlands. Arabica coffee from the regions of Gayo, Lintong and Sidikilang is typically processed using the Giling Basah (wet hulling) technique, which gives it a heavy body and low acidity. 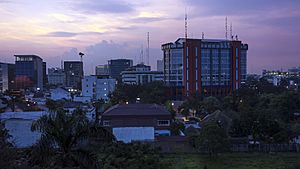 Medan, the largest city in Sumatra

By population, Medan is the largest city in Sumatra. Medan is also the most visited and developed cities in Sumatra. 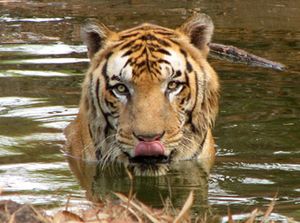 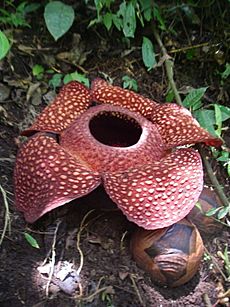 Sumatra supports a wide range of vegetation types which are home to a rich variety of species, including 17 endemic genera of plants. Unique species include the Sumatran pine which dominates the Sumatran tropical pine forests of the higher mountainsides in the north of the island and rainforest plants such as Rafflesia arnoldii (the world's largest individual flower), and the titan arum (the world's largest unbranched inflorescence).

The Sumatran tiger, Sumatran rhinoceros, Sumatran elephant, Sumatran ground cuckoo, and Sumatran orangutan are all critically endangered, indicating the highest level of threat to their survival. In October 2008, the Indonesian government announced a plan to protect Sumatra's remaining forests.

Several unconnected railway networks built during Netherlands East Indies exist in Sumatra, such as the ones connecting Banda Aceh-Lhokseumawe-Besitang-Medan-Tebingtinggi-Pematang Siantar-Rantau Prapat in Northern Sumatra (the Banda Aceh-Besitang section was closed in 1971, but is currently being rebuilt). Padang-Solok-Bukittinggi in West Sumatra, and Bandar Lampung-Palembang-Lahat-Lubuk Linggau in Southern Sumatra.

All content from Kiddle encyclopedia articles (including the article images and facts) can be freely used under Attribution-ShareAlike license, unless stated otherwise. Cite this article:
Sumatra Facts for Kids. Kiddle Encyclopedia.