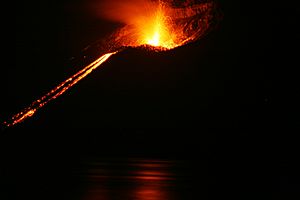 Krakatoa, or Krakatau, is a caldera in the Sunda Strait between the islands of Java and Sumatra in the Indonesian province of Lampung. The caldera is part of a volcanic island group (Krakatoa Archipelago) comprising four islands: two of which, Lang and Verlaten, are remnants of a previous volcanic edifice destroyed in eruptions long before the famous 1883 eruption; another, Rakata, is the remnant of a much larger island destroyed in the 1883 eruption.

Mount Krakatoa is an example of a stratovolcano.

There has been new eruptive activity since the late 20th century. On 22 December 2018 the central cone collapsed and caused a tsunami in the Sunda Strait. More than 400 people were killed.

Origin and spelling of the name

The earliest mention of the island in the Western world was on a map by Lucas Janszoon Waghenaer, who labelled the island "Pulo Carcata." ("Pulo" is a form of pulau, the Indonesian word for "island".) There are two spellings, Krakatoa and Krakatau, that are both acceptable. While "Krakatoa" is more common, Krakatau tends to be favored by Indonesians. The origin of the spelling Krakatoa is unclear, but may have been the result of a typographical error made in a British source reporting on the massive eruption of 1883. The colonial Dutch, however, used the spelling Krakatowa, probably to make the Dutch pronunciation more accurate.

Theories as to the origin of the Indonesian name Krakatau include:

There exists a popular belief that Krakatau was the result of a linguistic error. According to legend, "Krakatau" was adopted when a visiting ship's captain asked a local inhabitant the island's name, and the latter replied "Kaga tau" - a Jakartan/Betawinese slang phrase meaning "I don't know". This story is largely discounted; it closely resembles famous linguistic myths about the origin of the word kangaroo and the name of the Yucatán Peninsula.

The 1883 eruption ejected more than six cubic miles (25 cubic kilometers) of rock, ash, and pumice, and made the loudest sound ever recorded by human beings. The sound was heard as far away as Perth in Australia (3,500 km; 2,200 miles), and the island of Rodrigues near Mauritius (4,800 km; 3,000 miles). Many thousands of people were killed and injured by the eruption, mostly in the tsunami (giant wave) which followed the explosion.

The eruption destroyed two-thirds of what was then the island of Krakatoa. New eruptions at the volcano since 1927 have built a new island, called Anak Krakatau (child of Krakatoa).

The eruption produced erratic weather and spectacular sunsets throughout the world for many months afterwards, as a result of sunlight reflected from suspended dust particles ejected by the volcano high into Earth's atmosphere. This worldwide volcanic dust veil acted as a solar radiation filter, reducing the amount of sunlight reaching the surface of the earth. In the year following the eruption, global temperatures were lowered by as much as 1.2 degree Centigrade on average. Weather patterns continued to be chaotic for years, and temperatures did not return to normal until 1888. British artist William Ashcroft made hundreds of color sketches of the red sunsets half-way around the world from Krakatoa in the years after the eruption. In 2004, researchers proposed the idea that the blood-red sky shown in Edvard Munch's famous 1893 painting The Scream is also an accurate depiction of the sky over Norway after the eruption. 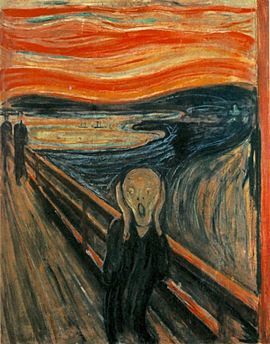 In 2004, an astronomer suggested that the blood-red sky shown in Edvard Munch's famous 1893 painting The Scream depicts the colour of the sky over Norway after the eruption.

A large part of the 1947 children's novel The Twenty-One Balloons by William Pene du Bois takes place on Krakatoa, where several families have established a wealthy and fanciful colony based on fictional diamond mines on the island.

Krakatoa has been featured as a subject and a part of the story in various television and film dramas. In the 1953 film Fair Wind to Java, an American sea captain and a pirate leader race one another to recover a fortune in diamonds hidden on Krakatoa, which begins its final eruption as they search the island for the treasure. The island was a prominent part of the plot of '"Crack of Doom," episode six of the Irwin Allen television series The Time Tunnel in 1966. It was also featured as the main part of the story line in the 1969 film, Krakatoa, East of Java (retitled Volcano in a re-release in the 1970s; the title contains a rather large geographical error, as Krakatoa is west of Java), which depicts an effort to salvage a priceless cargo of pearls located perilously close to the erupting volcano. An Indonesian martial arts action film, Krakatau (1977), starring Dicky Zulkarnaen and Advent Bangun, also set the story on the mountain. In more recent years, it has been the subject of a 2006 television drama, Krakatoa: Volcano of Destruction and again in 2008 as Krakatoa.

In Klaus Teuber's board game Seafarers of Catan, the "Krakatoa Variant" is a scenario involving an island composed of three volcano tiles.

In 1973, the American progressive rock band Styx released a spoken-word track called "Krakatoa" on its album The Serpent Is Rising. Written by then-guitarist John Curulewski along with Paul Beaver and Bernie Krause, the song tells the story of Krakatoa's eruption and the subsequent return of life to the island.

All content from Kiddle encyclopedia articles (including the article images and facts) can be freely used under Attribution-ShareAlike license, unless stated otherwise. Cite this article:
Krakatoa Facts for Kids. Kiddle Encyclopedia.