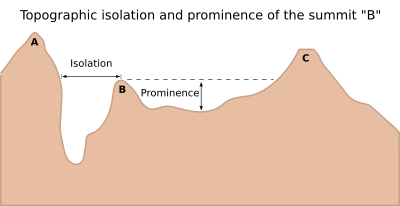 Topographic prominence is a way to measure the independence of a summit. It is often known simply as prominence. Some also call it autonomous height, relative height, shoulder drop (in the United States), or prime factor (in Europe). It is "the elevation difference between the summit and the lowest contour line encircling it and no higher summit".

Two related concepts in topography are col and parent peak. These are used to calculate the prominence. The parent peak is a higher mountain that is often (but not always) nearby. It is chosen using a variety of criteria. The col is the lowest point between two peaks. There may be several cols between a peak and its parent peak, since other peaks may be between the two. The highest of these cols is known as the key col. Prominence is measured as the difference in height between the summit and the key col.

All content from Kiddle encyclopedia articles (including the article images and facts) can be freely used under Attribution-ShareAlike license, unless stated otherwise. Cite this article:
Topographic prominence Facts for Kids. Kiddle Encyclopedia.