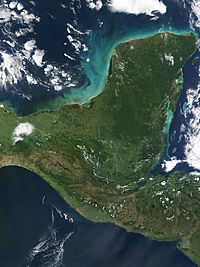 The Yucatán peninsula as seen from space

The Chicxulub crater is on the north coast. It is believed to be made by the impact that led to the extinction of the dinosaurs.

All content from Kiddle encyclopedia articles (including the article images and facts) can be freely used under Attribution-ShareAlike license, unless stated otherwise. Cite this article:
Yucatán Peninsula Facts for Kids. Kiddle Encyclopedia.