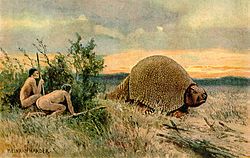 Glyptodon - an old type of an animal related to the armadillo. It lived in South America during the Pleistocene. 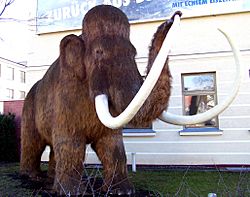 A model of a mammoth - a hairy elephant that lived in the frozen north. The last mammoth died about 4,500 years ago.

The Pleistocene stage or epoch was a long period of time. It stretched from 2.6 million years ago to 11,700 years ago. The Pleistocene followed the Pliocene. It is the first epoch of the Quaternary period and the sixth in the Cainozoic, and is followed by the present Holocene.

The Pleistocene was a time of ice ages: cold glacial periods with shorter, warmer, interglacials. Ice ages are when the world becomes much colder for a long time. In much of the 20th century geologists counted four "major" ice ages. Nowadays several more are called "major". During these glaciations, much of the world we know was covered by ice: North America down to and past the Great Lakes; all of northern Russia, and Europe; England down to the Thames.

Many animals that lived then have become extinct. Climate change and hunting by humans were responsible. Many of the mammals were larger and hairier versions of animals that live now. Glyptodon was something like a giant armadillo, and mammoths were hairy elephants.

Ancient human species lived during the Pleistocene. In Europe and Asia the large-brained Neanderthal (Homo neanderthalensis) lived until about 30,000 years ago. Modern man did not descend from Neanderthals, but originated in Africa from another branch of the genus.

All content from Kiddle encyclopedia articles (including the article images and facts) can be freely used under Attribution-ShareAlike license, unless stated otherwise. Cite this article:
Pleistocene Facts for Kids. Kiddle Encyclopedia.