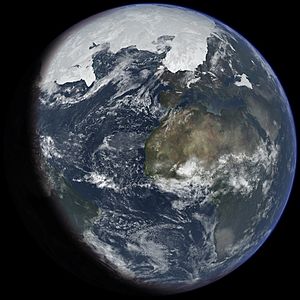 Artist's impression of Earth during the Last Glacial Maximum

The Quaternary began about 2.6 million years ago, and continues today. A great deal of information is considered when geologists discuss the timing of periods. The status of the Quaternary as a period is confirmed by the International Commission on Stratigraphy (ICS).

In the Quarternary were the glaciations known as the Ice Age. Also, anatomically modern humans evolved. During the Quaternary, many large mammalian species became extinct. This was due to climate change and hunting by humans.

All content from Kiddle encyclopedia articles (including the article images and facts) can be freely used under Attribution-ShareAlike license, unless stated otherwise. Cite this article:
Quaternary Facts for Kids. Kiddle Encyclopedia.