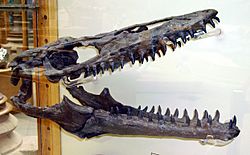 The impressive skull of a mosasaur, a giant marine reptile of the Cretaceous.

The Cretaceous period is the ninth and longest period in the Phanerozoic eon, lasting 80 million years from 145 to 65 million years ago (mya). It followed the Jurassic period, and is the third and last period of the Mesozoic era. After it came the Cainozoic era.

Though famous for its land fauna, the Cretaceous sea level rose much higher than today. North America was partly covered by an epicontinental inland sea, and half of Britain was under water. In the Upper Cretaceous, chalk, a type of limestone, was laid down in warm shallow seas. Chalk is 95% to 99% made up of coccoliths, the calcium carbonate (CaCO3) plates which tiny single-celled algae (coccolithophorids) produce. At its end came the famous meteorite strike which, with the volcanic flood basalts spewed out in the Deccan Plateau (India), ended so many of the dominant life-forms: see K/T extinction event.

The Lower Cretaceous at ~45 million years, is the longest epoch in the Phanerozoic eon.

All content from Kiddle encyclopedia articles (including the article images and facts) can be freely used under Attribution-ShareAlike license, unless stated otherwise. Cite this article:
Cretaceous Facts for Kids. Kiddle Encyclopedia.