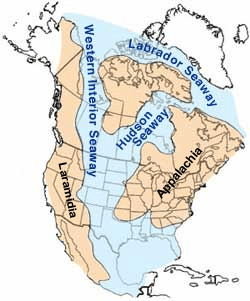 Western Interior Seaway during the mid-Cretaceous, about 100 million years before the present

Sea level was high in the Cretaceous, and the middle part of North America sank down. A shallowly-subducting plate pulled on the bottom of the lithosphere, causing it to move down. The sea entered both north and south, and came and went during the course of the Cretaceous. Widespread carbonate deposition suggests that the Seaway was warm and tropical, with abundant calcareous algae. The shrunken, regressive phase of the Western Interior Seaway is sometimes called the Pierre Seaway. 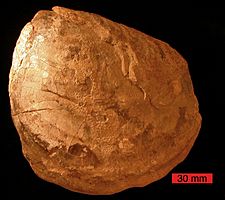 Inoceramus from the Cretaceous of South Dakota.

The Western Interior Seaway was a shallow sea filled with abundant marine life. This included predatory marine reptiles such as plesiosaurs, and mosasaurs that grew up to 18 meters long. Other marine life included sharks such as Squalicorax and the giant shellfish-eating Ptychodus mortoni (believed to be 10 meters long). There were advanced bony fish such as the massive 5-meter long Xiphactinus – a fish larger than any modern bony fish. Other sea life included invertebrates such as molluscs, ammonites, squid-like belemnites, and plankton including coccolithophores that secreted the chalky platelets that give the Cretaceous its name, foraminiferans and radiolarians.

The Western Interior Seaway was home to early birds also, including the flightless Hesperornis which had stout legs for swimming through water and small wing-like appendages used for marine steering rather than flight; and the tern-like Ichthyornis, an early avian with a toothy beak. Icthyornis shared the sky with large pterosaurs such as Nyctosaurus and Pteranodon. Pteranodon fossils are very common and it was likely a major component of the surface ecosystem, though it was only found in the southern reaches of the Seaway.

On the bottom, the giant clam Inoceramus left common fossilized shells in the Pierre Shale. This clam had a thick shell paved with "prisms" of calcite deposited at right angles to the surface, giving a pearly luster in life. Paleontologists suggest that its giant size was an adaptation for life in the murky bottom waters, where a correspondingly large gill area would have allowed the animal to cope with oxygen-depleted waters.

All content from Kiddle encyclopedia articles (including the article images and facts) can be freely used under Attribution-ShareAlike license, unless stated otherwise. Cite this article:
Western Interior Seaway Facts for Kids. Kiddle Encyclopedia.