Pterosaurs were flying reptiles which lived in the Mesozoic era at the same time as the dinosaurs. Most pterosaurs were quite small, but in the Upper Cretaceous some grew larger than any other flying animals. The pterosaur Quetzalcoatlus had a wing-span of up to 12 metres (~40 feet).

The first fossils occur in the Upper Triassic, and the group continues until the K/T extinction event at the end of the Cretaceous (220 to 65.5 million years ago). Pterosaurs are the earliest vertebrates known to have evolved powered flight. Their wings were made from a flap of skin between their bodies and a big fourth finger (sometimes called the "wing finger"). The pterosaurs fall into two groups. The earlier Rhamphorhynchoids (e.g. Rhamphorhynchus) had long tails and toothed jaws; The pterodactyloids (e.g. Pterodactylus) had short tails, and many had beaks with no teeth.

The first pterosaur fossil was discovered in the Late Jurassic Solnhofen limestone in Germany in 1784. This was exactly the same place as Archaeopteryx was found years later. Georges Cuvier first suggested that pterosaurs were flying creatures in 1801. Since the first pterosaur fossil was found, twenty-nine species of pterosaurs have been found in those deposits alone. A famous early UK find was an example of Dimorphodon by Mary Anning, in 1828 at Lyme Regis, Dorset, England. The name Pterosauria was coined in 1834.

Pterosaurs were genuine fliers, able to flap or soar. Their bodies were covered with fine hairs, so they were able to regulate their temperature (they were warm-blooded). They are a close sister-group to the dinosaurs, part of the Archosauria.

This early group did well from the Upper Triassic to the Lower Cretaceous. When we first see them in the fossil record they have developed three families, so biologists know their early evolution is not yet revealed.p240, 246 These three families are represented by the three genera Rhamphorhynchus, Dimorphodon and Eudimorphodon. At least one more family appears at the start of the Jurassic, the Anurognathidae.

The group had a long tail, usually stiffened by rod-like bony tendons to keep it straight. This shows that their flight was extremely stable, which means it kept on course, rather than darted about. This feature is also found in Archaeopteryx and in early bats, and in insects like dragonflies.

To understand this, it helps to know some basic things about flight aerodynamics and stability. Early planes were highly stable, and so are airliners. To dart about quickly requires special advanced brains and reflexes, which later birds and pterosaurs had, but early ones did not. The analogy in planes would be fighter planes, which need such fast reactions that the details are worked out by computer, with the pilot indicating where to go. It requires more brains to control unstable flight than it does stable flight.

All species in the group have teeth. This again has a parallel with birds; Archaeopteryx and many Cretaceous birds have teeth; modern birds do not. The disadvantage of teeth is that they are quite heavy; when the animal can do without them, they will gradually get selected out. Obviously, without teeth food cannot be chewed, but there are ways around that. Stones in the gizzard or stomach do the grinding in some birds.

A single specimen of the insect-eating Anurognathus was also found at Solnhofen. It had a shorter tail than any other rhamphorhynchoid. This suggests its need to dodge about to catch insects: "agile and highly manoeuvrable".p270

Pteranodon: a mounted skeleton made of replicas of the original fossil bones. The small bony crest at the rear of the skull indicates that this skeleton belonged to a female.

Fossil pterodactyloids appear in the Upper Jurassic. They were short-tailed pterosaurs, suggesting that they had more sophisticated control of their flight, which no doubt gave them some advantages. 2–300 specimens of 17 different species of pterosaur has been found at Solnhofen from eight different genera.p263 They include the earliest examples of Pterodactylus, and Germanodactylus, a genus which is also found in England and China. Ctenochasma, also from Solnhofen, had a comb of 260 thin teeth showing it to be a filter-feeder that may have waded or swam in the water. There were several other genera with similar life-styles.

In the Lower Cretaceous there were many pterodactyloids, mostly quite small. Gradually, larger versions evolved, and by the Upper Cretaceous most pterosaurs had huge wing-spans and clearly covered huge distances soaring on upcurrents in a warm environment. Pteranodon, with a wing-span of over 20 feet (7m), and Quetzalcoatlus, with a wingspan of 40 feet (12m) are famous examples. The question of their eating habits is still undecided.

Since birds were already common in the Lower Cretaceous, they would have competed vigorously with the smaller pterodactyloids. That may explain the extinction of the smaller pterosaur species, though the lack of fossils from the forested areas makes it difficult to judge. The huge Upper Cretaceous types clearly lived a different life-style from the smaller species, and one which was not yet accessible to birds. As the climate changed in the Upper Cretaceous, becoming colder and more seasonal, the number of pterosaurs became fewer. Like most of the larger species on Earth, the huge pterosaurs did not survive the K/T extinction event. At least some families of birds did. So ended the competition between the two types of flying reptile through the long 79 million years of the Cretaceous period.p346 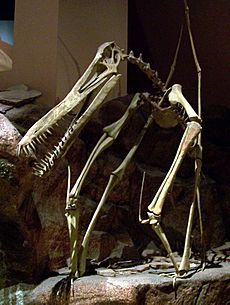 There are many adaptations of the head and jaws of pterosaurs, so it is quite certain that different forms used different feeding methods, as birds do. Overall, most fossils have been found in marine strata, which suggests that they could fly well over water, and that fish were on the menu for many species. The jaws of fish-eaters was long and often held forward-pointing teeth, good for catching fish (see Anhanguera). Remains of a last fish supper have been found in Pteranodon.

Fossils show that one pterosaur, the Pterodaustro found in Argentina, had comb-like strainers in its mouth. The pterosaur probably ate by filling its lower jaw with water and pushing the water out of its mouth through the strainers. The strainers could catch any plankton or other small creatures that were in the water, and when the water was gone, the animal could eat what was left. Other species had long, compressed lower jaws, which suggest they were skimmers at the top of the water.

The other main item of diet was the insects. Flying insects were abundant in the Mesozoic, and many pterosaur species give clear signs that this was their food. These have a broad mouth, often with short peg-like teeth.p339–341 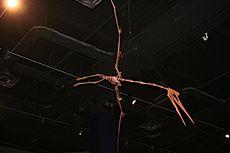 For a long time people thought pterosaurs could only glide and soar, and were not strong enough to flap their wings. In the 20th century, after aeroplanes had been invented, our understanding of flight advanced. English palaeontologists showed that pterosaurs could fly, and Tilly Edinger showed that by the end of the Jurassic, pterosaur brains were more like that of modern birds than of Archaeopteryx. Recent work has used working model to simulate their flight.p218 The wing membrane was about 1mm thick, with a tough skin and had long fibres reinforcing it. This can be clearly seen in some of the fossils.p332 The structure helped the wings survive the stresses of flight. The larger pterosaurs were mainly soarers, as is the case with birds today.

How pterosaurs moved on the ground has been something of a mystery. It is most likely that they walked on four legs while on the ground, as fossil tracks have been found showing they used both their legs and hands to support them..

Pterosaurs also had special bones. They were extremely light (even more than bird's wings – some were almost as thin as a piece of paper), and some were almost hollow. Tiny holes in the bones are evidence of air sacs which extended into the vertebrae and limb bones, as it does with birds. Also present were supporting struts which made these bones stronger. With these special bones, even the largest of pterosaurs, Quetzalcoatlus, probably weighed less than 200 pounds.

Pterosaurs were probably egg-layers, and some eggs have been found at pterosaur sites. There is evidence that some species, such as Pteranodon, had sexual dimorphism (sexes looked different). The skeletons with large cranial (head) crests and small pelvic canals were presumably males. Where several specimens occur at the same location, adults can be distinguished from juveniles. Evidence of tooth wear in Eudimorphodon suggests the young were insectivorous, while the adults ate fish.p343 Development took place rapidly in these warm-blooded reptiles, and much of their life-style parallels that of birds. The high energy-level needed for flight explains why both reptilian forms (pterosaurs and birds) developed similar metabolism. In many respects, birds and pterosaurs are good examples of convergent evolution.

All content from Kiddle encyclopedia articles (including the article images and facts) can be freely used under Attribution-ShareAlike license, unless stated otherwise. Cite this article:
Pterosaur Facts for Kids. Kiddle Encyclopedia.