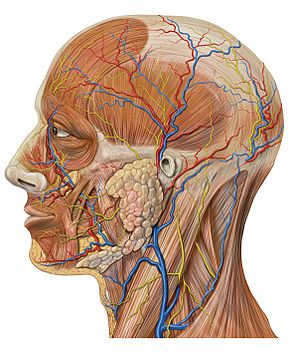 Anatomy of the human head

The history of anatomy dates back to 1600 BC when Egyptians began studying human anatomy. They discovered the functions of many organs like the liver, spleen, kidneys, heart etc. and were the first to discover the structure and functions of the lymphatic system.

For long periods the dissection of deceased people was forbidden, and correct ideas about human anatomy was a long time coming.

Academic human anatomists are usually employed by universities, medical schools and teaching hospitals. They are often involved in teaching, and research. Gross anatomy studies parts of the body that are big enough to see. Micro-anatomy studies smaller parts.

All content from Kiddle encyclopedia articles (including the article images and facts) can be freely used under Attribution-ShareAlike license, unless stated otherwise. Cite this article:
Anatomy Facts for Kids. Kiddle Encyclopedia.