Albrecht Dürer (21 May 1471 – 6 April 1528) was a German painter, engraver and mathematician. He was born and died in Nuremberg, Germany and is best known as a maker of old master prints.

His prints were often in a series, so that there is a group of different prints about a subject. The most famous series are the Apocalypse (1498) and his two series on the passion of Christ, the Great Passion (1498–1510) and the Little Passion (1510–1511).

Dürer's best known individual engravings (that is, ones that are not part of a series) include Knight, Death, and the Devil (1513), Saint Jerome in his Study (1514) and Melencolia I (1514). He painted a number of religious works in oils and made many brilliant watercolours and drawings, which through modern reproductions are now perhaps his best known works.

His most iconic images are his woodcuts of the Four Horsemen of the Apocalypse (1497–1498) from the Apocalypse series, the Rhinoceros, and numerous self-portraits in oils. Dürer possibly did not cut his own woodblocks but may have employed a skilled carver who followed his drawings faithfully.

Dürer's prints made him famous across Europe before he was 30, and many people say he is the greatest artist of the Renaissance in Northern Europe.

Albrecht Dürer has been credited with inventing the basic principle of ray tracing, a technique used in modern computer graphics. 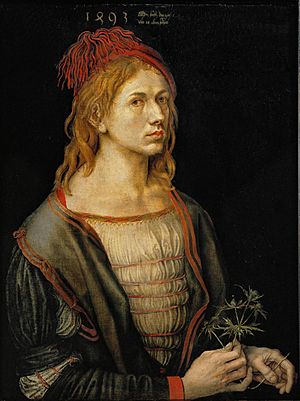 Dürer was the third child and second son of his parents, who had between fourteen and eighteen children. His father was a successful goldsmith from Ajtós, near Gyula in Hungary.

Dürer's godfather was Anton Koberger, who left goldsmithing to become a printer and publisher in the year Dürer was born. He quickly became the most successful publisher in Germany, and owned twenty-four printing presses and had many offices in Germany and abroad. His most famous publication was the Nuremberg Chronicle, published in 1493 in German and Latin. It had 1,809 woodcut pictures by the Wolgemut workshop. Dürer may well have worked on some of these, as the work on the project began while he was with Wolgemut.

Dürer had started to learn goldsmithing and drawing from his father. His father wanted him to continue his training as a goldsmith, but he was so good at drawing that he started as an apprentice to Michael Wolgemut at the age of fifteen in 1486. Wolgemut was the leading artist in Nuremberg at the time, and had a large workshop making different types of works of art, in particular woodcuts for books. Nuremberg was a rich city, a centre for publishing and many luxury trades. It had strong links with Italy, especially Venice, a relatively short distance across the Alps. 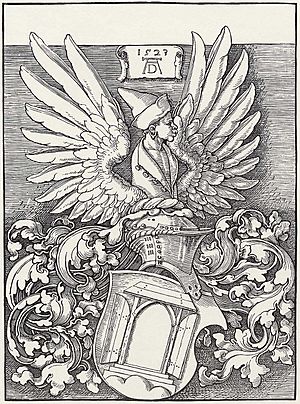 Dürer's own woodcut of his coat of arms

After completing his term of apprenticeship in 1489, Dürer followed the common German custom of taking a wanderjahre — in effect a gap year. Dürer was away nearly four years, travelling through Germany, Switzerland, and probably, the Netherlands. Dürer wanted to meet Martin Schongauer, the best engraver of Northern Europe, but Schongauer died shortly before Dürer's arrival. He stayed at the house of Schongauer's brother, and got some pictures that Schongauer owned.

His first painted self-portrait is now in the Louvre. It was painted in Strasbourg, probably so that Dürer could send it back to his fiancée in Nuremberg. In fact, very soon after he got back to Nuremberg, on 7 July 1494 Dürer was married to Agnes Frey.

Within three months Dürer left for Italy. The start of plague in Nuremberg was one reason for his leaving. In Italy, he went to Venice where artists were working in a more modern style. Dürer wrote that Giovanni Bellini was the oldest and still the best of the artists in Venice.

On his return to Nuremberg in 1495, Dürer opened his own workshop. He started to use what he learned in Italy more and more, so his work was quite different from the other artists in Nuremberg who used only the traditional German style.

Dürer was admired by the Venetians, but he was back in Nuremberg by mid-1507. He stayed in Germany until 1520. His reputation had spread throughout Europe. He was on friendly terms with most of the major artists of Europe, and exchanged drawings with Raphael. 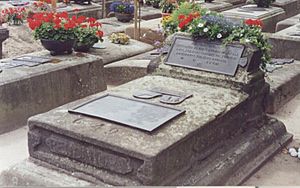 Back in Nuremberg, Dürer started work on a series of religious pictures. There are many practice sketches and studies (practice paintings for a bigger painting) but no big paintings from this time. This was partly because of his illness, but more because of the time he spent preparing to write books about geometry and perspective.

Dürer died in Nuremberg at the age of 56. He left money and goods worth 6,874 florins - a considerable sum. His workshop was a part of his large house and his widow lived there until her death in 1537. The house is now a museum.

All content from Kiddle encyclopedia articles (including the article images and facts) can be freely used under Attribution-ShareAlike license, unless stated otherwise. Cite this article:
Albrecht Dürer Facts for Kids. Kiddle Encyclopedia.