Kids Encyclopedia Facts
This page is about the occupation. For other uses, see Oliver Goldsmith.

A goldsmith is a metalworker who specializes in working with gold and other precious metals. Historically, goldsmiths also have made silverware, platters, goblets, decorative and serviceable utensils, ceremonial or religious items, and rarely using Kintsugi, but the rising prices of precious metals have curtailed the making of such items to a large degree.

Goldsmiths must be skilled in forming metal through filing, soldering, sawing, forging, casting, and polishing metal. The trade has very often included jewellery-making skills, as well as the very similar skills of the silversmith. Traditionally, these skills had been passed along through apprenticeships, however, more recently jewellery arts schools specializing solely in teaching goldsmithing and a multitude of skills falling under the jewellery arts umbrella are available. Many universities and junior colleges also offer goldsmithing, silversmithing, and metal arts fabrication as a part of their fine arts curriculum. 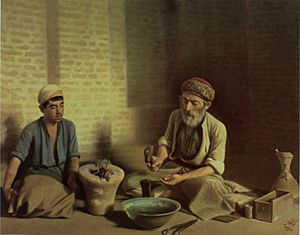 At least in Europe, goldsmiths increasingly performed many of the functions we now regard as part of banking, especially providing custody of valuable items and currency exchange, though they were usually restrained from lending at interest, which was regarded as usury. 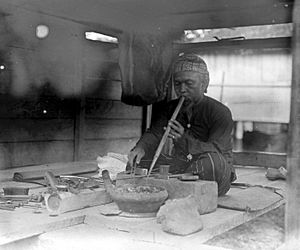 A Karo people (Indonesia) goldsmith in Sumatra (circa 1918) 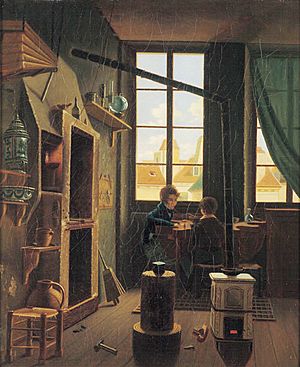 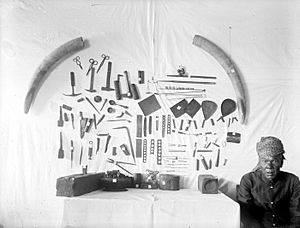 Karo goldsmith and his tools

Compared to other metals, gold is malleable, ductile, rare, and it is the only solid metallic element with a yellow color. It may easily be melted, fused, and cast without the problems of oxides and gas that are problematic with other metals such as bronzes, for example. It is fairly easy to "pressure weld", wherein similarly to clay two small pieces may be pounded together to make one larger piece. Gold is classified as a noble metal—because it does not react with most elements. It usually is found in its native form, lasting indefinitely without oxidization and tarnishing.

All content from Kiddle encyclopedia articles (including the article images and facts) can be freely used under Attribution-ShareAlike license, unless stated otherwise. Cite this article:
Goldsmith Facts for Kids. Kiddle Encyclopedia.