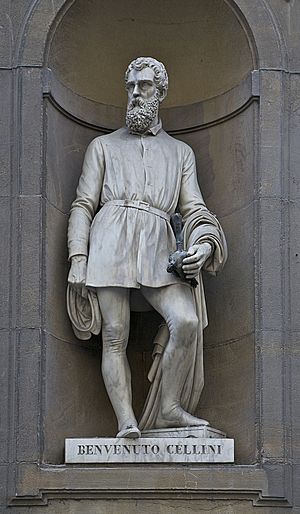 Statue depicting Cellini, in the Uffizi in Florence

Benvenuto Cellini ( 3 November 1500 – 13 February 1571) was an Italian goldsmith, sculptor, draftsman, soldier and musician, who also wrote a famous autobiography. He was one of the most important artists of Mannerism.

He was born in Florence, and died there.

All content from Kiddle encyclopedia articles (including the article images and facts) can be freely used under Attribution-ShareAlike license, unless stated otherwise. Cite this article:
Benvenuto Cellini Facts for Kids. Kiddle Encyclopedia.