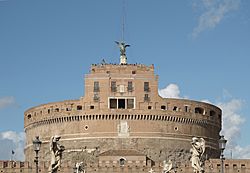 The Mausoleum of Hadrian, now known as Castel Sant'Angelo is a towering cylindrical building in Parco Adriano, Rome.

It was commissioned by the Roman Emperor Hadrian as a mausoleum for himself and his family. The building was later used by the popes as a fortress and castle. It is now a museum. The structure was once the tallest building in Rome.

All content from Kiddle encyclopedia articles (including the article images and facts) can be freely used under Attribution-ShareAlike license, unless stated otherwise. Cite this article:
Hadrian's Mausoleum Facts for Kids. Kiddle Encyclopedia.