This article is about Popes in general. For the current Pope, see Pope Francis. 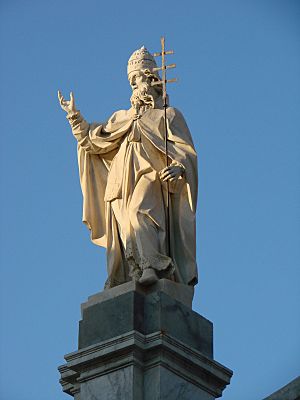 Statue of Pope Sylvester I before a church in Pisa. He was the bishop of Rome 314–335

The Pope is the head of Catholic Church. His official title is the Bishop of Rome. He is the Chief of State of Vatican City and the head of the Catholic Bishops. The current Pope is Pope Francis.

Popes are elected by Cardinals of the Catholic Church. Once they are elected they hold the position until they die or resign. Usually they do not resign, though; Pope Benedict XVI is the only Pope to resign in the last 500 years. A newly elected Pope chooses a regnal name. Everyone is told this new name when the Habemus Papam is read out. The current pope (Francis) was called Jorge Bergoglio before he became a pope.

The name Pope comes from the Greek word pappas, meaning "father". Catholics believe that when making statements ex cathedra, that is official statements teaching about faith and morals, the Pope is infallible - which means God will not allow his followers to be misled by allowing their leader to make a wrong statement. Only two of any Pope's statements have been ex cathedra.

Popes today travel to many countries around the world preaching. The Pope is the only person in the world who runs a country and a religion at the same time. Like other bishops he wears a big hat called a mitre and holds a staff called a crosier.

Some recent Popes, and the time they were Pope:

The Popes in Avignon

During parts of the Middle Ages, the French kings had a lot of influence in Europe. For this reason, seven popes (and two anti-popes) lived in Avignon, rather than Rome. The Avignon Papacy was from 1309 to 1377. During that time, the popes were known for their greed and corruption. These popes were allies of France; the enemies of France were also their enemies.

Antipopes were people that were elected by small groups who did not like the official choice. Catherine of Siena convinced pope Gregory XI to move back to Rome. Unfortunately, he died shortly after moving. The cardinals then elected Urban VI to be the next pope. The French cardinals did not recognise this election as legitimate. They declared the papal see as vacant; which led to the Western Schism. The schism lasted until the Council of Constance in 1417. During this time, there was a pope in Rome, an Antipope in Avignon, and for some time, a second antipope. Each of the three was recognised as legitimate pope by different European powers. This led to a big split in the church as a whole. The council elected Pope Martin V as a new pope, recognised by all parties.

All content from Kiddle encyclopedia articles (including the article images and facts) can be freely used under Attribution-ShareAlike license, unless stated otherwise. Cite this article:
Pope Facts for Kids. Kiddle Encyclopedia.