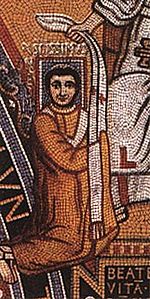 Leo was born in Rome.

Leo reported his election to Charlemagne, sent him the keys of Saint Peter's tomb and the banner of Rome. Charlemagne replied that it was his function to defend the church and the Pope's to pray for the kingdom and for victory of the army.

Charlemagne went to Rome in November 800, and on December 1 held a council there with representatives of both sides. Leo, on December 23, took an oath of purgation concerning the charges brought against him, and his opponents were exiled. Two days later Leo crowned Charlemagne at St. Peter's tomb. Charlemagne did intervene in church affairs, not always successfully.

The reasons for the coronation, the involvement beforehand of the Frankish court, and the relationship to the Byzantine Empire are all matters of debate among historians.

All content from Kiddle encyclopedia articles (including the article images and facts) can be freely used under Attribution-ShareAlike license, unless stated otherwise. Cite this article:
Pope Leo III Facts for Kids. Kiddle Encyclopedia.