Raffaello Sanzio, usually known as Raphael (April 6, 1483 - April 6, 1520), was a Renaissance painter and architect. He, along with Leonardo da Vinci and Michelangelo, is considered one of the three greatest painters of the High Renaissance.

Raphael was born in Urbino, in the region of Umbria, Italy. He was the son of Giovanni Santi (d. 1494), who was also a painter, and Magia di Battista Ciarla (d. 1491). Giovanni Santi was Raphael's first teacher, but he died when Raphael was only eleven. 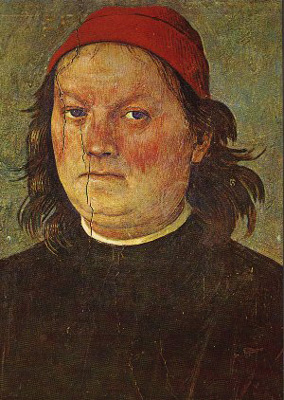 Perugino was Raphael's teacher. This is his self-portrait.

When he was about 15, Raphael became an apprentice at the workshop of the painter Pietro Perugino. Perugino was known by that name because he was the most famous painter in the town of Perugia. Perugino was famous, not only in Umbria but also in Rome and in Florence, the home of Leonardo and Michelangelo. He had been one of the artists given the important job of painting the Pope's large chapel in the Vatican, the Sistine Chapel.

Perugino was known to have expert ways of painting (technique) and was good at finishing paintings on time. This made him popular with his patrons. He painted some portraits of people alive in his day, but most of his pictures are of religious figures of the past. Some of his paintings are small pictures of the Madonna and Child that could be used in a family chapel for private worship. Because he was famous, Perugino also got lots of work from wealthy patrons and churches, so he painted many very large pieces to go above the altars in churches. To do this, he needed the help of his apprentices.

Raphael was able to learn a great deal from Perugino - drawing, the anatomy of the human figure, paint chemistry, and the technique of putting the paint onto the picture in smooth layers. The people in Perugino's paintings often have sweet, gentle faces. Many of Raphael's paintings are also sweet and gentle. Some painters, such as Leonardo, were quick to change their style and make their paintings show their own touch. But Raphael continued to paint in the style that Perugino had taught him. He added new ideas that he learned by looking at the work of other artists. Raphael is famous simply because he excelled at painting and because people loved his paintings so much. 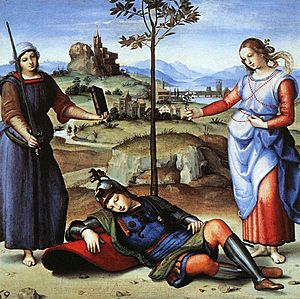 The Vision of a Knight, by Raphael

The painting that is thought to be his earliest known work is a small picture called The Vision of a Knight. It is considered to be an allegorical painting. In this painting, a knight lies asleep. In his dream, there are two beautiful women. One woman, dressed in soft, flowing clothes, offers him flowers. The other woman, dressed in dark clothing, offers the knight a sword and a book. The path behind the woman in soft, flowing clothes runs beside a river. The other path leads up a steep mountain. In this painting, Raphael was thinking about choices. Should the knight take the road to duty or the road to love?

Other early pictures by Raphael are Three Graces and Saint Michael.

Raphael's first major work was The Marriage of the Virgin, which was painted in 1504. It was influenced by Perugino's painting for the Sistine Chapel of Jesus giving the Keys to Saint Peter. It is now in the Brera Gallery in Milan, Italy. 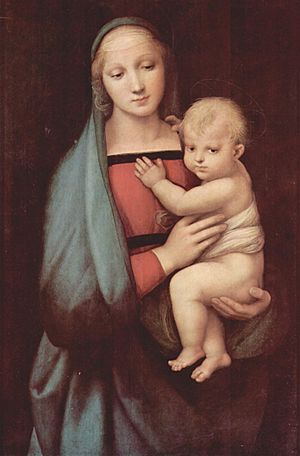 Madonna of the Grand Duke

In about 1504, Raphael traveled with another painter, Pinturicchio, to Florence, Italy. Florence was famous for its artworks, its artist's workshops, its new Renaissance buildings, and its huge cathedral. Raphael wanted to see the work of Michelangelo, Leonardo da Vinci, and other important painters and sculptors.

While he was in Florence, Raphael painted many of his famous Madonna paintings. The most famous of these paintings are: 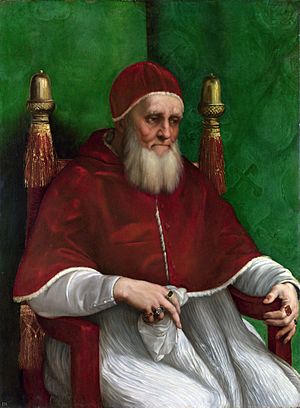 In 1508, Raphael was called to Rome by Pope Julius II. He became so popular while he was in Rome that he was known as the "Prince of Painters." He spent the last 12 years of his life in Rome and created many of his most famous paintings there.

While he was in Rome, Raphael was commissioned (given a job), to paint a fresco of the prophet Isaiah in the Church of Sant'Agostino. While he was working on the painting, he went to visit his friend, the architect, Donato Bramante. Bramante was at the Vatican while Michelangelo was painting the Sistine Chapel ceiling. Of course, Raphael wanted to see what the famous master was doing. While Michelangelo was away, Bramante took Raphael into the Chapel. When Raphael saw the way that Michelangelo had painted the prophets, he was so excited that he went back to Sant'Agostino's Church, scraped his painting of the prophet Isaiah off the wall, and started all over again. It is easy to see that Raphael's painting is in the style of Michelangelo. Raphael was not ashamed of this. He did it to give honor to the great master. 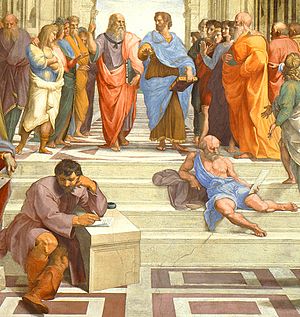 Detail from The School of Athens

Among Raphael's most famous paintings are the frescos that are painted on the walls of Julius II's own rooms in the Vatican Palace, known as the Stanze. The paintings in the Stanza della Segnatura and the Stanza d'Eliodoro were created by Raphael himself, while the Stanza dell'Incendio was designed by Raphael and painted by his assistants.

The School of Athens is the most famous fresco in the Stanze della Segnatura. It shows a group of learned people from Ancient Greece, philosophers, poets, dramatists, mathematicians and others. They are listening to the central figure, who is the philosopher, Plato. The painting is meant to show that at that time, the early 1500s, there was a new birth of ideas and learning among the people of Rome that was equal to the learning of Ancient Athens.

To make this message clear, Raphael used the faces of the people that he knew. Michelangelo, with his broken nose, is sitting with his chin on his hand. The tall figure of Plato with long hair and flowing beard is a portrait of Leonardo da Vinci. He even included himself in the painting, standing near the back on the right side.

One of the excellent things about this painting is the way that Raphael has painted the building in which the figures are standing. The architecture looks as if it is opening up from the real room. 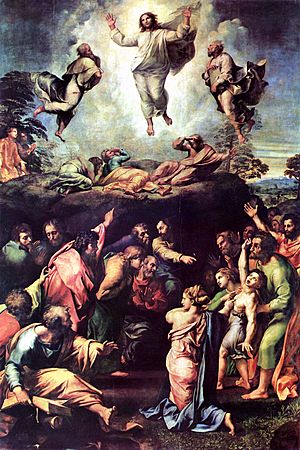 In the 1500s, painters were often asked to design architecture. Raphael's first work as an architect was the funeral chapel in the church of Santa Maria del Popolo. Pope Leo X also chose Raphael to help design Saint Peter's Basilica alongside Donato Bramante. After Bramante died, Raphael took over the designing of the basilica and changed its groundplan from a Greek Cross to a Latin Cross. Michelangelo went back to Bramante's plan but made it simpler. Then another architect, Maderna, made the building longer, as Raphael had planned.

Raphael's last work of art was a painting of the Transfiguration. This was an altarpiece, but Raphael died before he could complete it. It was instead finished by Giulio Romano, who was one of Raphael's assistants.

Raphael died on his 37th birthday and was buried in the Pantheon in Rome. His funeral mass was celebrated at the Vatican and his Transfiguration altarpiece was put at the head of Raphael's funeral carriage.

All content from Kiddle encyclopedia articles (including the article images and facts) can be freely used under Attribution-ShareAlike license, unless stated otherwise. Cite this article:
Raphael Facts for Kids. Kiddle Encyclopedia.