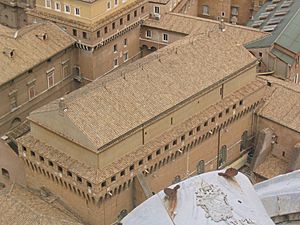 The rectangular building in the middle of the picture is the Sistine Chapel.

The Sistine Chapel is a large chapel in the Vatican Palace, the place in Italy where the Pope lives. Originally known as the Cappella Magna ('Great Chapel'), the chapel takes its name from Pope Sixtus IV, who restored it between 1473 and 1481. Since that time, the chapel has served as a place of religious ceremonies and papal activities. Today, it is the site of the papal conclave, the process by which a new pope is selected. The fame of the Sistine Chapel lies mainly in the frescos that decorate the interior, most particularly the Sistine Chapel ceiling and The Last Judgment by Michelangelo.

During the reign of Sixtus IV, a team of Renaissance painters that included Sandro Botticelli, Pietro Perugino, Pinturicchio, Domenico Ghirlandaio and Cosimo Rosselli, created a series of frescos depicting the Life of Moses and the Life of Christ, offset by papal portraits above.

Between 1508 and 1512, under the patronage of Pope Julius II, Michelangelo painted the chapel's ceiling, a project which changed the course of Western art and is regarded as one of the major artistic accomplishments of human civilization. 23 years later Michelangelo returned and (between 1535 and 1541) painted The Last Judgment for Popes Clement VII and Paul III. The fame of Michelangelo's paintings has drawn multitudes of visitors to the chapel ever since they were revealed five hundred years ago. 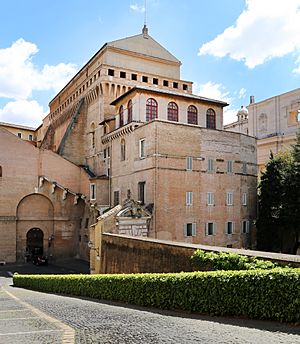 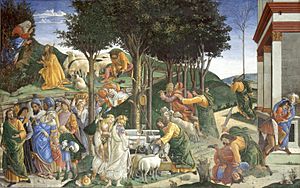 Trials of Moses by Botticelli 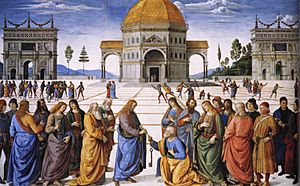 The Delivery of the Keys by Perugino

The Sistine Chapel is a brick building shaped like a rectangle. The outside is plain, with no decoration and no big door. It has a walk-way near the top, for soldiers. It has six arched windows on its two side walls and a curved ceiling called a barrel vault.

The inside of the chapel is richly decorated. The floor is of coloured marble. The lower parts of the walls are painted to look like gold and silver cloth.

The other decorations in the chapel are paintings which tell stories to help people understand about Jesus Christ and about the Roman Catholic Church.

The middle part of the walls has 12 large paintings called frescoes, done by famous artists in 1481. The artists' names were Domenico Ghirlandaio, Sandro Botticelli, Perugino, Cosimo Rosselli, Pinturicchio, Benedetto Ghirlandaio, Luca Signorelli and Bartolomeo della Gatta. The frescoes show stories from the Bible. On the north side, the stories are about the life of Moses. On the south side, they are about the life of Jesus.

Above the stories, near the windows, are painted pictures of Popes. 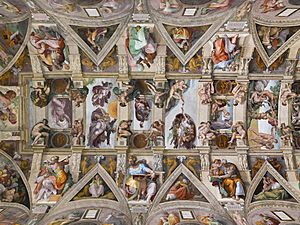 The ceiling of the Sistine Chapel was painted by Michelangelo.

The ceiling is the most famous part of the Sistine Chapel, and many thousands of visitors go to see it. In 1505 Pope Julius II asked Michelangelo to paint the ceiling. Michelangelo was a famous sculptor. He did not want to be a painter. Three years later, he agreed to paint the ceiling. He worked from 1508 to 1511, standing on a high platform with his arms stretched above his head. (Although some people think that he lay down to paint, this is not true.) Because he painted onto wet plaster, the smell and the heat was terrible. He wrote a poem about how sick he was.

Along the center of the ceiling are painted nine pictures that tell stories from the Book of Genesis in the Old Testament of the Bible. The stories start with three pictures of God making light, making the Earth, the Sun and the Moon, and making the Sea and Sky.

The next three pictures tell the story of the first man and woman, Adam and Eve. In the first scene, God has just made Adam. He reaches out his hand and touches his finger to give him Life.

In the next picture, Adam is asleep and God makes Eve from one of Adam's ribs.

In the third picture there are two scenes. Adam and Eve are tricked by the Devil to eat fruit from the tree that they have been told not to touch. In the other scene, an angel chases them out of God's Garden of Eden. This story tells how sin came into the world.

The last three pictures are about Noah's Ark. They tell about a sad and sinful world. Because of human sin and unkindness, God sends a flood. Only Noah and his family escape in the large boat that they build. When the flood has ended, they make an altar and kill a sheep as a sacrifice to God. But then Noah grows grape vines, makes wine and gets drunk. One of his sons sees Noah lying naked and laughs at his father. Noah is ashamed and curses his son. These stories show how people keep acting the wrong way, even when they get a second chance.

All around the wall, Michelangelo painted twelve big figures of wise men and women. These were the prophets and sibyls who told people that God would send Jesus Christ to save them from sin.

Also painted on the ceiling are 20 beautiful young men called the ignudi. No-one knows what they are for sure, but perhaps they are angels.

When the ceiling was finally uncovered, everyone was amazed. Giorgio Vasari, who wrote Michelangelo's life story, says that hundreds of people came every day to stare and stare. 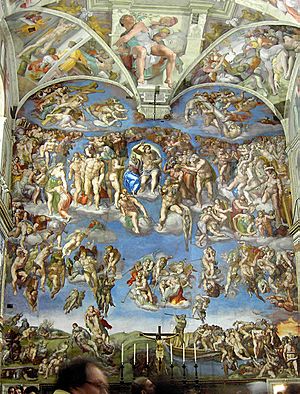 The Last Judgement by Michelangelo.

Michelangelo was happy to get back to his sculpture. But in 1537 Pope Paul III ordered him to paint another large fresco. This time it was on the wall above the altar. It was finished in 1541.

Michelangelo painted The Last Judgement which shows Jesus judging the people of the Earth and sending some to Hell while others are welcomed into Heaven by Saints. He painted most of the figures naked. This made some of the priests in the church very angry. They paid another artist to paint clothes onto the Blessed Virgin Mary and many of the other figures.

The election of a new Pope, the conclave takes place in the Sistine Chapel. In those occasions a chimney is installed in the roof of the chapel, where the smoke comes out from. If white smoke comes out: a new Pope has been elected. Black smoke: no successful election yet. During present-day meetings of cardinals, the chapel is carefully searched for bugs, recorders and cameras, so that the conclave is kept secret.

All content from Kiddle encyclopedia articles (including the article images and facts) can be freely used under Attribution-ShareAlike license, unless stated otherwise. Cite this article:
Sistine Chapel Facts for Kids. Kiddle Encyclopedia.