Daniele Ricciarelli (c. 1509 – 4 April 1566), better known as Daniele da Volterra, was a Mannerist Italian painter and sculptor. He is remembered for his association with the work of Michelangelo. Many of Daniele's most important works were based on designs made for that purpose by Michelangelo. After his death, and following orders of Pope Pius V, Daniele covered the genitals of The Last Judgment with clothing, which earned him the nickname of Il Braghettone ("the breeches maker"). 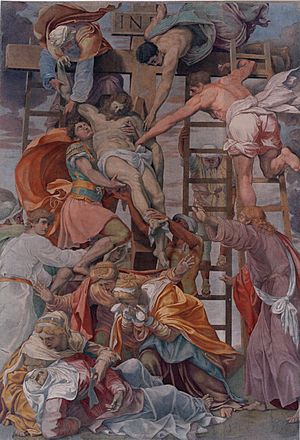 Daniele da Volterra, Descent from the Cross (c. 1545), after its restoration in 2004; Trinità dei Monti, Rome.

All content from Kiddle encyclopedia articles (including the article images and facts) can be freely used under Attribution-ShareAlike license, unless stated otherwise. Cite this article:
Daniele da Volterra Facts for Kids. Kiddle Encyclopedia.