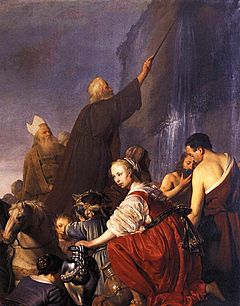 Moses (Mōše; Ancient Greek: Mωϋσῆς in both the Septuagint and the New Testament; Arabic: موسىٰ‎code: ar is deprecated , Mūsa) is a person in Abrahamic religions. He was a religious leader, lawgiver, and prophet according to the Hebrew Bible. Generally, he is also seen as the author of the Torah. He is often called Moshe Rabbenu in Hebrew (Hebrew: מֹשֶׁה רַבֵּנוּ, Lit. "Moses our Teacher/Rabbi") and seen as the most important prophet in Judaism. Christianity, Islam, the Bahá'í Faith, and the Rastafari, also see him as an important prophet. Moses has also been an important symbol in American history, from the first settlers up until the present.

According to the Book of Exodus, Moses was born in a time when his people were increasing in number and the Egyptian Pharaoh was worried that they might help Egypt's enemies. Moses' Hebrew mother, Jochebed, hid him when the Pharaoh ordered all newborn Hebrew boys to be killed, and he ended up being adopted into the Egyptian royal family. After killing an Egyptian slave-master, Moses fled across the Red Sea to Midian where he tended the flocks of Jethro, a priest of Midian on the slopes of Mt. Horeb. After the Ten Plagues were unleashed on Egypt, Moses led the Hebrew people out of Egypt, across the Red Sea, where they based themselves at Horeb and compassed the borders of Edom. It was at this time that Moses received the Ten Commandments. Despite living to the age of 120, Moses died before reaching the Land of Israel.

Moses was born of the Levi tribe. The new Pharaoh, afraid of the ever-growing Israelite population, ordered every new-born Hebrew boy to be thrown into the Nile River, but let every girl live. Moses' mother Jochebed gave birth and kept him hidden for three months from Pharaoh's soldiers. When she could no longer keep him hidden, she fashioned a basket lined with tar and pitch, and placed him in the reeds along the riverbank, while his sister Miriam kept watch from a distance.

A princess, one of pharaoh's daughters went down to the Nile to bathe. There she discovered a crying baby and noticed he was a Hebrew child. Joining the attendants, Moses' sister offered to find a Hebrew woman to nurse the baby for the princess, who agreed. Bringing Moses' real mother, the princess asked her to be the baby's wet nurse, for which she was paid. When the child grew older, she took him to pharaoh's daughter, who named him Moses, saying, "I drew him out of the water."

Moses grew up a privileged member of the court. He was well educated academically and physically. He was taught hand-to-hand combat tactics and leadership.

Upon adulthood, he killed an Egyptian guard who was beating a Hebrew slave and had to leave Egypt because Pharaoh tried to kill him

Moses fled to Midian, where he married Jethro's daughter, Zipora. Zipora had two sons. The old Pharaoh died and the Israelites cried loudly. God heard him. One day Moses was tending his father-in-law, Jethro's, sheep and came to Mount Horeb. God's angel made a bush burn with fire, but it did not burn up. When he came nearer, God spoke to him and ordered him to remove his shoes as he was on holy land. God commanded him to be a leader for the Israelites and bring them out of Egypt. At first Moses did not want to do it and said that he was not good with words, but God commanded him and gave Aaron, his brother, to speak for him. Moses return to Egypt and told the elders what happened.

Moses and the Pharaoh

Moses then went to the Pharaoh and asked him to let the Israelites go. However the Pharaoh did not agree. Finally God inflicted ten plagues upon the Egyptians before Pharaoh agreed to release the Israelites. The last plague was the killing of all first-born, both human and animals. However, to save the Israelites, they were instructed to mark their doors with blood from a lamb, so that the avenging angel would see it and know to "pass over" that house.

The Pharaoh finally decided to let the Israelites go who then migrated in large numbers from Egypt. The Pharaoh later changed his mind and followed Moses and his people with an army to attack them. But Moses made the Red Sea to part and give way for Israelites to pass. The Israelites were safe but the Pharaoh's army was destroyed.

Journey in the Wilderness

Moses led the Israelites through the wilderness, and God gave them manna and quails to eat, and water from rocks to drink. He also caused the Amalekites to lose in a battle. When Moses came to Mount Sinai, he went up to receive the Ten Commandments and other laws from God. The Ten Commandments were written by God on two tablets. God also told him the instructions of the priests' duties. Moses was up the mountain for forty days and forty nights.

When the people waited for Moses and did not find him, they made Aaron, his brother, make a calf out of gold and worshiped it. God warned Moses about it, and when Moses came down and saw what they did, he was so angry that the tablets fell and they smashed into pieces. The people of Levi tribes are commanded to kill people who worshiped the calf.

Later on Moses asked God to forgive the people. God wrote for Moses two more tablets, and put them in the Ark. Moses also asked craftsmen to make the Tabernacle as God wanted. Moses is founder of basis of the philosophy of law as well as such modern legal doctrines as independent judiciary and separation of powers.).

While the Israelites were wandering around the wilderness, Moses was the one to whom God spoke However, the people kept complaining about the hardships. God instructed Moses to send twelve spies to scout the land God is giving to them; however some of them became afraid because the people living there looked stronger and more powerful than they. They told the others not to go there. Only Joshua son of Nun and Caleb son of Jephunneh reported the truth as God wanted. God decided because of this that the Israelites would wander forty years in the wilderness, and every one except Joshua and Caleb from that generation would die without seeing the promised land.

God gave many laws to the Israelites through Moses. Moses made Joshua take over him before he died.

Moses died before he reached Canaan, the land God was leading his people to. He was 120 years old when he died.

Today Jews around the world follow the laws of the Ten Commandments and the Torah that God gave to them through Moses. He is also believed to be a prophet by Muslims.

The Bible, the Torah, and the Quran have references to a person called Moses in them. The name they give to the person, varies. Other people also have written about Moses. These include Tacitus and Strabo. It is not known how much these descriptions have taken from earlier sources, which may now have been lost.

An existing earlier source is the Ipuwer Papyrus, which records the events of the Ten Plagues.

No other written records from countries such as Egypt or Assyria have been found, that are from before about 850 BCE and that tell about the stories of the Bible or its main characters. There is no known physical evidence (such as pottery shards or stone tablets) to say that Moses' really existed. Pharaohs have ordered the destruction of records that put them into a bad light. Several cartouches from monuments have also been destroyed in different epochs of Ancient Egyptian history.

It looks like the story written about Moses in the Bible has two different sources. There were two groups of people who told the story. The two stories were passed on separately. Only later were they combined into the version that can now be found in the Bible. Passing on the stories from one generation to the next has perhaps also introduced inaccuracies. Some people added things to the story when they told it. They also omitted other things.

According to the Torah, Moses ordered the death penalty for many offences. He also had defeated enemies killed. Jews, Christians and Muslims consider him to be a holy figure. For this reason, criticism of these passages of the Hebrew Bible has been left to others.

In the late eighteenth century, for example, the deist Thomas Paine commented at length on Moses' Laws in The Age of Reason. Paine also gave his view that "the character of Moses, as stated in the Bible, is the most horrid that can be imagined", giving the story at Numbers 31:13-18 as an example. In the nineteenth century the agnostic Robert G. Ingersoll wrote "...that all the ignorant, infamous, heartless, hideous things recorded in the 'inspired' Pentateuch are not the words of God, but simply 'Some Mistakes of Moses'". In the 2000s, the atheist Richard Dawkins referring to the same passage like Paine, concluded, "No, Moses was not a great role model for modern moralists."

All content from Kiddle encyclopedia articles (including the article images and facts) can be freely used under Attribution-ShareAlike license, unless stated otherwise. Cite this article:
Moses Facts for Kids. Kiddle Encyclopedia.