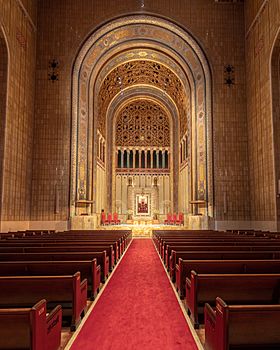 Interior of Congregation Emanu-El of New York, the largest Reform synagogue in the world.

Reform Judaism (also known as Liberal Judaism or Progressive Judaism) is a major Jewish denomination that emphasizes the evolving nature of the faith, the superiority of its ethical aspects to the ceremonial ones, and belief in a continuous revelation, closely intertwined with human reason and intellect, and not centered on the theophany at Mount Sinai.

A liberal strand of Judaism, it is characterized by lessened stress on ritual and personal observance, regarding Jewish Law as non-binding and the individual Jew as autonomous, and great openness to external influences and progressive values.

The origins of Reform Judaism lie in 19th-century Germany, where Rabbi Abraham Geiger and his associates formulated its early principles. Since the 1970s, the movement has adopted a policy of inclusiveness and acceptance, inviting as many as possible to partake in its communities, rather than strict theoretical clarity. It is strongly identified with progressive political and social agendas, mainly under the traditional Jewish rubric tikkun olam, or "repairing of the world". Tikkun olam is a central motto of Reform Judaism, and action for its sake is one of the main channels for adherents to express their affiliation. The movement's most significant center today is in North America.

The various regional branches sharing these beliefs, including the American Union for Reform Judaism (URJ), the Movement for Reform Judaism (MRJ) and Liberal Judaism in Britain, and the Israel Movement for Reform and Progressive Judaism, are all united within the international World Union for Progressive Judaism. Founded in 1926, the WUPJ estimates it represents at least 1.8 million people in 50 countries: close to a million registered adult congregants, as well as almost as many unaffiliated individuals who identify with the denomination. This makes it the second-largest Jewish denomination worldwide.

All content from Kiddle encyclopedia articles (including the article images and facts) can be freely used under Attribution-ShareAlike license, unless stated otherwise. Cite this article:
Reform Judaism Facts for Kids. Kiddle Encyclopedia.