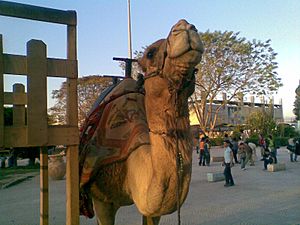 Jericho is a city in the Palestinian Territories and is located near the Jordan River in the West Bank. In 2007, it had a population of 18,346. The city was occupied by Jordan from 1949 to 1967, and has been held under Israeli occupation since 1967; administrative control was handed over to the Palestinian Authority in 1994.

Archaeologists have unearthed the remains of more than 20 successive settlements in Jericho, the first of which dates back 11,000 years (9000 BC), almost to the very beginning of the Holocene epoch of the Earth's history.

Copious springs in and around the city have attracted human habitation for thousands of years. Jericho is described in the Hebrew Bible as the "City of Palm Trees".

All content from Kiddle encyclopedia articles (including the article images and facts) can be freely used under Attribution-ShareAlike license, unless stated otherwise. Cite this article:
Jericho Facts for Kids. Kiddle Encyclopedia.