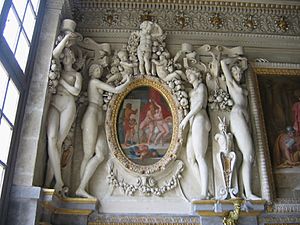 Elaborate stucco (plaster) reliefs decorating the Chateau de Fontainebleau were hugely influential in Northern Mannerism. There is a plaster low-relief decorative frieze above. 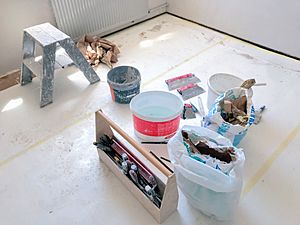 Plaster is a building material used for the protective or decorative coating of walls and ceilings and for moulding and casting decorative elements. In English "plaster" usually means a material used for the interiors of buildings, while "render" commonly refers to external applications. Another imprecise term used for the material is stucco, which is also often used for plasterwork that is worked in some way to produce relief decoration, rather than flat surfaces.

The most common types of plaster mainly contain either gypsum, lime, or cement, but all work in a similar way. The plaster is manufactured as a dry powder and is mixed with water to form a stiff but workable paste immediately before it is applied to the surface. The reaction with water liberates heat through crystallization and the hydrated plaster then hardens.

Plaster can be relatively easily worked with metal tools or even sandpaper, and can be moulded, either on site or to make pre-formed sections in advance, which are put in place with adhesive. Plaster is not a strong material; it is suitable for finishing, rather than load-bearing, and when thickly applied for decoration may require a hidden supporting framework, usually in metal.

Forms of plaster have several other uses. In medicine plaster orthopedic casts are still often used for supporting set broken bones. In dentistry plaster is used to make dental impressions. Various types of models and moulds are made with plaster. In art, lime plaster is the traditional matrix for fresco painting; the pigments are applied to a thin wet top layer of plaster and fuse with it so that the painting is actually in coloured plaster. In the ancient world, as well as the sort of ornamental designs in plaster relief that are still used, plaster was also widely used to create large figurative reliefs for walls, though few of these have survived.

All content from Kiddle encyclopedia articles (including the article images and facts) can be freely used under Attribution-ShareAlike license, unless stated otherwise. Cite this article:
Plaster Facts for Kids. Kiddle Encyclopedia.