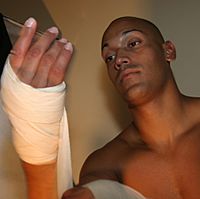 This man has suffered a serious insurgency wound. Bandages are also used in martial arts to prevent dislocated joints.

A bandage is strip of cloth or other material that is used to stop and absorb blood from wounds.

In common speech, the word "bandage" is often used to mean a dressing, though technically the two are different things.

The lists it as a form in which Absorbent Gauze may be provided. It is prepared from type 1 Absorbent gauze in various widths and lengths.

The term 'compression bandage' describes a wide variety of bandages with many different applications. its made up of elastic 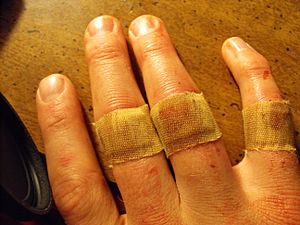 Short stretch compression bandages are applied to a limb (usually for treatment of lymphedema or venous ulcers). This type of bandage is capable of shortening around the limb after application and is therefore not exerting ever-increasing pressure during inactivity. This dynamic is called resting pressure and is considered safe and comfortable for long-term treatment. Conversely, the stability of the bandage creates a very high resistance to stretch when pressure is applied through internal muscle contraction and joint movement. This force is called working pressure.

Long stretch compression bandages have long stretch properties, meaning their high compressive power can be easily adjusted. However, they also have a very high resting pressure and must be removed at night or if the patient is in a resting position. 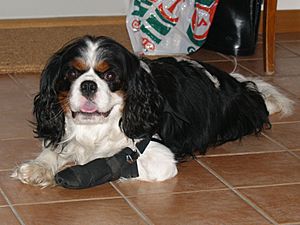 Also known as a cravat bandage, a triangular bandage is a piece of cloth put into a right-angled triangle, and often provided with safety pins to secure it in place. It can be used fully unrolled as a sling, folded as a normal bandage, or for specialized applications, as on the head. One advantage of this type of bandage is that it can be makeshift and made from a fabric scrap or a piece of clothing. The Boy Scouts popularized use of this bandage in many of their first aid lessons, as a part of the uniform is a "neckerchief" that can easily be folded to form a cravat.

A tube bandage is applied using an applicator, and is woven in a continuous circle. It is used to hold dressings or splints on to limbs, or to provide support to sprains and strains, so that it stops bleeding.

All content from Kiddle encyclopedia articles (including the article images and facts) can be freely used under Attribution-ShareAlike license, unless stated otherwise. Cite this article:
Bandage Facts for Kids. Kiddle Encyclopedia.