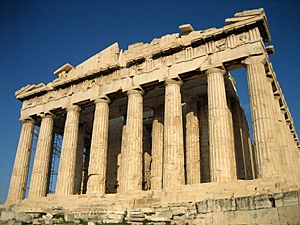 The Parthenon is a temple dedicated to Athena, located on the Acropolis in Athens. It is a symbol of the culture and sophistication of the ancient Greeks

Ancient Greece was a civilization belonging to a period of Greek history from the Greek Dark Ages of the 12th–9th centuries BC to the end of antiquity (c. AD 600). Immediately following this period was the beginning of the Early Middle Ages and the Byzantine era.

Roughly three centuries after the Late Bronze Age collapse of Mycenaean Greece, Greek urban poleis began to form in the 8th century BC, bringing in the Archaic period and colonization of the Mediterranean Basin.

This was followed by the period of Classical Greece, an era that began with the Greco-Persian Wars, lasting from the 5th to 4th centuries BC. Due to the conquests by Alexander the Great of Macedon, Hellenistic civilization flourished from Central Asia to the western end of the Mediterranean Sea.

The Hellenistic period came to an end with the conquests and annexations of the eastern Mediterranean world by the Roman Republic, which established the Roman province of Macedonia in Roman Greece, and later the province of Achaea during the Roman Empire.

Classical Greek culture, especially philosophy, had a powerful influence on ancient Rome, which carried a version of it to many parts of the Mediterranean Basin and Europe. For this reason, Classical Greece is generally considered to be the influencing culture which provided the foundation of modern Western culture and is considered the cradle of Western civilization.

Classical Greek culture gave great importance to knowledge. Science and religion were not separate and getting closer to the truth meant getting closer to the gods. In this context, they understood the importance of mathematics as an instrument for obtaining more reliable ("divine") knowledge. Greek culture, in a few centuries and with a limited population, managed to explore and make progress in many fields of science, mathematics, philosophy and knowledge in general. 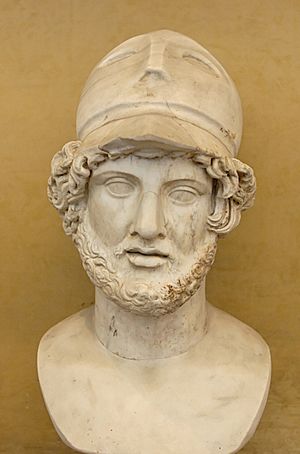 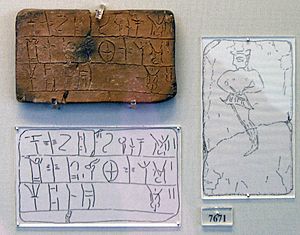 In the 8th century B.C., the Greeks learned how to read and write a second time. They had lost literacy at the end of the Mycenaean culture, as the Mediterranean world fell into the Dark Ages. The Greek Dark Ages (~1100 BC–750 BC), or Bronze Age collapse, is a period in the history of Ancient Greece and Anatolia from which there are no records, and few archaeological remains.

The Greeks learned about the alphabet from other ancient people, the Phoenicians. They made some adjustments to it. In particular, the Greeks introduced regular letters for vowels, which was necessary for their language. Their alphabet was, in turn, copied by the Romans, and much of the world now uses the Roman alphabet. 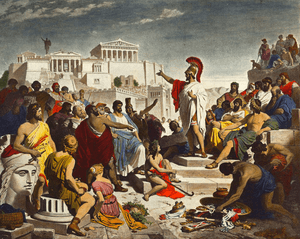 Pericles giving a speech, he was a key political figure

Ancient Greece had one language and culture, but was not unified until 337 BC, when Macedonia defeated Athens and Thebes. That marked the end of the Classic period, and the start of the Hellenistic period. Even then, the conquered cities were merely joined to Philip II of Macedon's Corinthian League; they were not occupied, and ruled themselves. 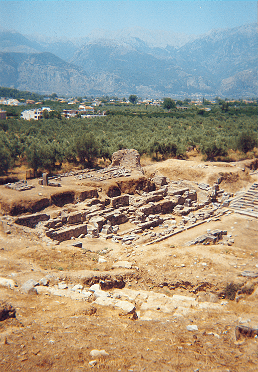 The ruins of Sparta

Ancient Greece consisted of several hundred more-or-less independent city states. This was different from other societies, which were tribal, or kingdoms ruling over relatively large territories.

Undoubtedly the geography of Greece—divided and sub-divided by hills, mountains and rivers—contributed to the nature of ancient Greece.

On the one hand, the ancient Greeks had no doubt that they were 'one people'; they had the same religion, same basic culture, and same language. Yet each city state or "polis" was independent, unification was something rarely discussed by the ancient Greeks.

Later, in the Classical period, the leagues were fewer and larger, and dominated by one city, particularly Athens, Sparta and Thebes. Often cities would be compelled to join under threat of war or as part of a peace treaty. 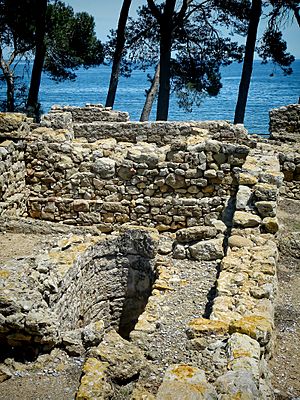 Remains of a cistern in the ancient Greek city of Neapolis

Some cities were democratic, some were aristocratic, and some were monarchies. Some had many revolutions in which one kind of government replaced another.

One famous Greek kingdom is Macedon, which became briefly the largest empire the world had seen at the time by conquering the Persian empire including ancient Egypt and reaching into modern-day India. Other famous kingdoms are Epirus and Thessaly.

The number of Greeks grew and soon they could not grow enough food for all the people. When this happened, a city would send people off to start a new city, known as a colony. Because the terrain was rough, most travel was by sea. For this reason, many new cities were established along the coastline. 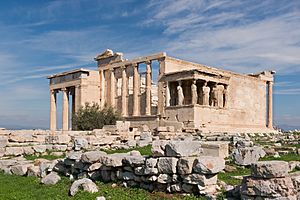 By the 6th century BC some cities became much more important than the others. They were Corinth, Thebes, Sparta, and Athens.

They would talk and then vote on what to do at the Boule (the parliament). But the women did not vote. Every year, Athenian citizens elected eight generals who led them in war. 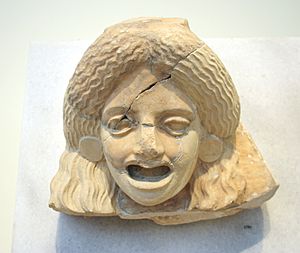 Men, if not working, fighting or discussing politics, could, at festival times, go to Ancient Greek theater to watch dramas, comedies or tragedies. These often involved politics and the gods of Greek mythology. Women were not allowed to perform in the theater: male actors played female roles.

Women did domestic work, such as spinning, weaving, cleaning and cooking. They were not involved in public life or politics. Women from rich families however, had slaves to carry out domestic work for them. 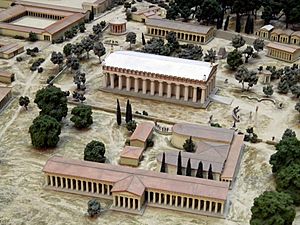 Model shows the site of Olympia, home of the ancient Olympic Games, as it looked around 100 BC

The famous Olympic games were held at Olympia every four years. They were for men only, and women were not allowed to attend, even as spectators. The sports included running, javelin throwing, discus throwing and wrestling, athletes could come from any Greek city.

Another competition, the Heraean Games, was held for women. It was also held at Olympus at a different time from the men's event. The rules for girls in Sparta were different from other cities. They were trained in the same events as boys, because Spartans believed that strong women would produce babies that would become strong future warriors.

Later, in the Classical period, girls could compete in the same festivals as males.

All content from Kiddle encyclopedia articles (including the article images and facts) can be freely used under Attribution-ShareAlike license, unless stated otherwise. Cite this article:
Ancient Greece Facts for Kids. Kiddle Encyclopedia.