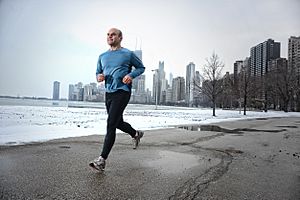 A man running in a park in Chicago. 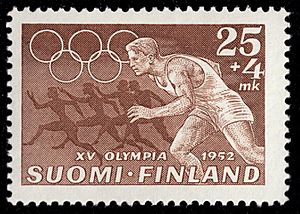 Running is the way in which people or animals travel quickly on their feet. It is a method of travelling on land. It is different to walking in that both feet are regularly off the ground at the same time. Different terms are used to refer to running according to the speed: jogging is slow, and sprinting is running fast.

Running is a popular form of exercise. It is also one of the oldest forms of sport. The exercise is known to be good for health; it helps breathing and heartbeat, and burns any spare calories. Running keeps a person fit and active. It also relieves stress. Running makes a person thirsty, so it is important to drink water when running.

Running injuries are quite common among runners. Many running injuries can be reduced through proper training, wearing of the correct gear and awareness of the running environment. 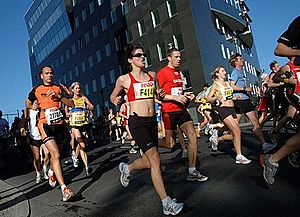 Runners in the Berlin Marathon in 2007

Running is a part of many forms of competitive racing. Most running races test speed, endurance or both. Track and field races are usually divided into sprints, middle-distance races and long-distance races. Races held off the track may be called cross-country races. A marathon is run over 42 kilometres.

Footraces have probably existed for most of human history. They were an important part of the ancient Olympic Games.

All content from Kiddle encyclopedia articles (including the article images and facts) can be freely used under Attribution-ShareAlike license, unless stated otherwise. Cite this article:
Running Facts for Kids. Kiddle Encyclopedia.