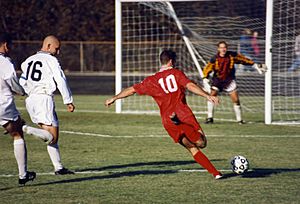 Association football is one of the most popular sports in the world. In this image, a striker is shooting the ball to score a goal.

Sport is commonly defined as an athletic activity that involves a degree of competition, such as netball or basketball. Some games and many kinds of racing are called sports. A professional at a sport is called an athlete. Many people play sports with their friends. They need coaches to teach or train teams or individuals how to do better. Sports can be played indoors or outdoors and by individuals or teams.

For children, sports play an extremely important part in their lives by providing all round development of the child, physically, mentally and emotionally. It also helps them to be fit and keep them healthy.

Some people like to watch other people play sports. Those who watch others playing sports are called fans. While some fans watch sports on television, others actually go to stadiums or other places where people pay to watch them in person. These fans are called spectators.

People engage in many kinds of sports, for example:

All content from Kiddle encyclopedia articles (including the article images and facts) can be freely used under Attribution-ShareAlike license, unless stated otherwise. Cite this article:
Sport Facts for Kids. Kiddle Encyclopedia.