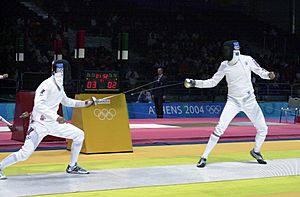 Fencing is a sport that includes two people with swords. The aim is to score hits. There is also a referee. In the olden times when two people argued they fenced the first one to draw blood was wrong and the person would be dead, so the person that won would claim the dead person's house and belongings.

A foil fencer. Valid target is in red.

The foil is a light and easy to bend weapon, first made in mid 17th century as a weapon for practice. 'Hits' can only be scored by hitting the target area with the point of the sword. The target area is the torso.

An Épée fencer. Valid target is in red.

The épée is the heaviest of the three weapons. To score a hit, the push-button on the end of the weapon must remain fully down for 2-10 milliseconds, and must arrive (hit) with a force of at least 7.35 newtons. The target area for Épée is the entire body. This includes the feet and the head.

A sabre fencer. Valid target is in red.

The sabre is the "cutting" weapon, with a curved guard (to protect the hand) and a triangular blade. However, in modern electric scoring, a touch with any part of the sabre, (point, flat or edge, as long as it is on target) will count as a hit. The target area in sabre is everything from the waist up, except for the hands.

Fencers wear a uniform to avoid injury. They wear a mask of black mesh with a bib. Also, a jacket, short pants and a sort of half-a-shirt (called an underarm protector or plastron), all of white fabric. They must also wear socks that cover their legs. Women must wear a chest protector. These are collectively called "whites."

All content from Kiddle encyclopedia articles (including the article images and facts) can be freely used under Attribution-ShareAlike license, unless stated otherwise. Cite this article:
Fencing Facts for Kids. Kiddle Encyclopedia.