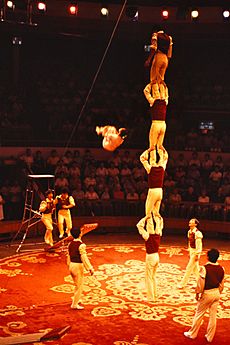 Chinese acrobat in midair after being propelled off a springboard, China, 1987

Acrobatics (from Greek, "walk on tiptoe, strut") is the performance of extraordinary human feats of balance, agility, and motor coordination. It can be found in many of the performing arts, sports (sporting) events, and martial arts.

Acrobatics is most often associated with activities that make extensive use of gymnastic elements, such as acro dance, circus, and gymnastics, but many other athletic activities — such as ballet and diving — may also employ acrobatics.

Although acrobatics is most commonly associated with human body performance, it may also apply to other types of performance, such as aerobatics.

Acrobatic traditions are found in many cultures, and there is evidence that the earliest such traditions occurred thousands of years ago. Ancient Greeks and Romans practiced acrobatics, and the noble court displays of the European Middle Ages would often include acrobatic performances that included juggling.

In China, acrobatics have been a part of the culture since the Western Han Dynasty (206 BC-AD 220). Acrobatics were part of village harvest festivals. During the Tang Dynasty, acrobatics saw much the same sort of development as European acrobatics saw during the Middle Ages, with court displays during the 7th through 10th century dominating the practice.

Acrobatics continues to be an important part of modern Chinese variety art.

Though the term initially applied to tightrope walking, in the 19th century, a form of performance art including circus acts began to use the term as well.

In the late 19th century, tumbling and other acrobatic and gymnastic activities became competitive sport in Europe.

All content from Kiddle encyclopedia articles (including the article images and facts) can be freely used under Attribution-ShareAlike license, unless stated otherwise. Cite this article:
Acrobatics Facts for Kids. Kiddle Encyclopedia.