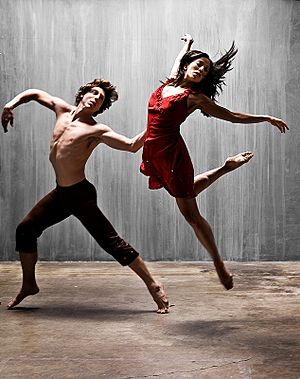 Dance is a type of performance art practiced all over the world.

The performing arts are those forms of art in which individual people perform separately or together. The artist's own body, face, and presence is needed for the performance.

Performance art differs from the plastic arts, which use materials such as clay, metal or paint which can be moulded or transformed. A plastic art produces some physical art object. The term 'performing arts' first appeared in the English language in the year 1711.

Artists who participate in performing arts in front of an audience are called performers, including actors, comedians, dancers, magicians, musicians, and singers. Performing arts are also supported by workers in related fields, such as songwriting and stagecraft.

Performers often adapt their appearance, such as with costumes and stage makeup, etc.

There is also a specialized form of fine art in which the artists perform their work live to an audience. This is called performance art. Most performance art also involves some form of plastic art, perhaps in the creation of props. Dance was often referred to as a plastic art during the Modern dance era. 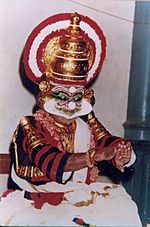 Drama (Greek 'to do', 'seeing place') is the branch of the performing arts concerned with acting out stories in front of an audience. It uses speech, gesture, music, dance, sound and spectacle—indeed any one or more elements of the other performing arts. In addition to the standard narrative dialogue style of plays, theatre takes such forms as musicals, opera, ballet, illusion, mime, Indian dance, kabuki, mummers' plays, stand-up comedy, pantomime, and non-conventional or arthouse theatre.

Dance (from Old French dancier) generally refers to human movement either used as a form of expression or in a social, spiritual or performance setting.

Choreography is the art of making dances, and the person who does this is called a choreographer.

The definition of what is dance depends on society, and ranges from folk dance to codified, virtuoso techniques such as ballet. In sports, rhythmic gymnastics, figure skating, ice dancing and synchronized swimming are dance disciplines. Some martial arts have dance-like moves.

Starting in the 6th century BC, the first recorded performing art began in Ancient Greece, ushered in by the tragic poets such as Aeschylus and Sophocles. These poets wrote plays which, in some cases, incorporated dance (see Euripides). Aristophanes is noted for his satyrical comedies (5th century BC).

By the 6th century AD, the Western performing arts died out as the Dark Ages began. Between the 9th century and 14th century, performing art in the West was limited to religious historical enactments and morality plays, organized by the Church in celebration of holy days and other important events.

All content from Kiddle encyclopedia articles (including the article images and facts) can be freely used under Attribution-ShareAlike license, unless stated otherwise. Cite this article:
Performing arts Facts for Kids. Kiddle Encyclopedia.