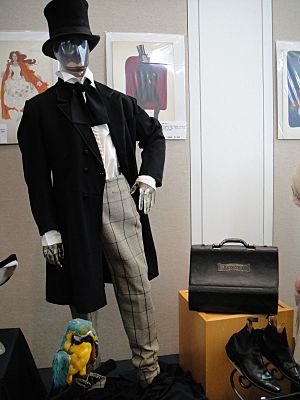 The term costume can refer to wardrobe and dress in general, or to the distinctive style of dress of a particular people, class, or period. It can also refer to the artistic arrangement of accessories in a picture, statue, poem, or play, appropriate to the time, place, or other circumstances represented or described, or to a particular style of clothing worn to portray the wearer as a character or type of character other than their regular persona at a social event such as a masquerade, a fancy dress party or in an artistic theatrical performance.

National or regional costume is worn to show that people come from a country or region. Many years ago, national costume was worn every day by many groups of people. Today most people do not wear costumes. Usually people dress up in national costume for special celebrations or for national dancing.

Some well known examples of national costume are the kilt which is worn by people in Scotland and the kimono worn in Japan.

When actors perform in the theatre they usually wear a costume. These are the special clothes they wear in order to pretend they are a particular character in the story which they act out. They might be pretending to be any kind of person: a beggar, king, businessman, ancient god, etc. Some theatrical costumes stretch the truth about characters. Examples are Harlequin and Pantaloon in the Commedia dell'arte. 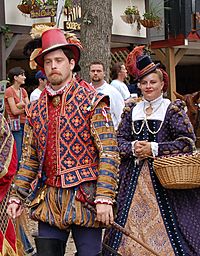 People wearing costumes which are like the clothes worn in the Renaissance about 500 years ago. They are taking part in the 2006 Bristol Renaissance Faire

The wearing of costumes has become an important part of Mardi Gras and Halloween celebrations, and (to a lesser extent) people may also wear costumes in conjunction with other holiday celebrations, such as Christmas and Easter. Mardi Gras costumes are usually jesters and other fantasy characters, while Halloween costumes traditionally take the form of supernatural creatures such as ghosts, vampires, and angels. Christmas and Easter costumes typically portray mythical holiday characters, such as Santa Claus by donning a santa suit and beard or play the Easter Bunny by putting on a furry costume and head. Costumes may serve to portray various other character themes during secular holidays, such as an Uncle Sam costume worn on the Independence day for example.

One of the more prominent places people see costumes is in theatre, film and TV. Another very popular place for costumes is sporting events and college games Those costumes are called mascots. These team mascots hep the club or team rally around their own teams cause.

All content from Kiddle encyclopedia articles (including the article images and facts) can be freely used under Attribution-ShareAlike license, unless stated otherwise. Cite this article:
Costume Facts for Kids. Kiddle Encyclopedia.