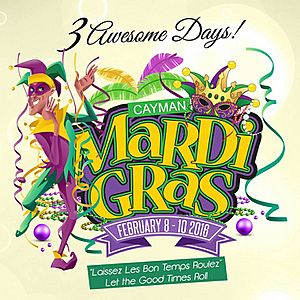 Mardi Gras (Fat Tuesday) is a festival held the day before Ash Wednesday, signifying the end of the Carnival season and the start of Lent. Many cities (especially those with large Catholic populations) like New Orleans are famous for their Mardi Gras.

During Mardi Gras, almost everyone takes part in celebrating with lavish parades and parties. Many different people celebrate Mardi Gras in their own way, some people have small parties and eat many of the tasty pastries and some people have huge parties and celebrate in a big way. Some of the pastries they eat are called king's cake, hot cross buns, punchskis, tricolor scrolls and thick sugar cookies. There are many more things that other people eat but these are the usual American celebration food for mardi gras. There are so many different parades and kinds of celebrations.

In some countries, including the United Kingdom, Ireland and Australia, the day is called Shrove Tuesday, Pancake Tuesday or Pancake Day. 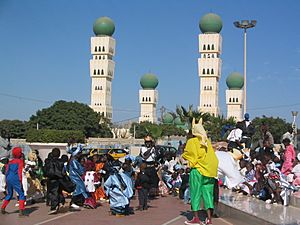 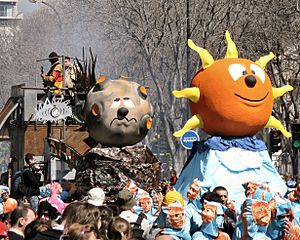 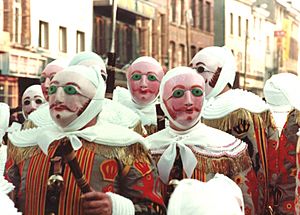 The festival season varies from city to city, as some traditions, such as the one in New Orleans, Louisiana, consider Mardi Gras to stretch the entire period from Twelfth Night (the last night of Christmas which begins Epiphany) to Ash Wednesday. Others treat the final three-day period before Ash Wednesday as the Mardi Gras. In Mobile, Alabama, Mardi Gras-associated social events begin in November, followed by mystic society balls on Thanksgiving, then New Year's Eve, followed by parades and balls in January and February, celebrating up to midnight before Ash Wednesday. In earlier times, parades were held on New Year's Day. Other cities famous for Mardi Gras celebrations include Rio de Janeiro; Barranquilla, Colombia; George Town, Cayman Islands; Port of Spain, Trinidad and Tobago; Quebec City, Quebec, Canada; and Mazatlán, Sinaloa, Mexico.

Carnival is an important celebration in Anglican and Catholic European nations. In the United Kingdom and Ireland, the week before Ash Wednesday is called "Shrovetide", ending on Shrove Tuesday. It has its popular celebratory aspects, as well. Pancakes are a traditional food. Pancakes and related fried breads or pastries made with sugar, fat, and eggs are also traditionally consumed at this time in many parts of Latin America and the Caribbean.

All content from Kiddle encyclopedia articles (including the article images and facts) can be freely used under Attribution-ShareAlike license, unless stated otherwise. Cite this article:
Mardi Gras Facts for Kids. Kiddle Encyclopedia.