Dakar is the capital city of Senegal. It is on the country's Atlantic coast on the western edge of Africa. The city is a trade seaport for items leaving Africa. Dakar has a population of 1,030,594 people. The metropolitan area has about 2.45 million people living in it.

The National Assembly of Senegal and Senegal Presidential Palace are in Dakar.

The area that is now Dakar was first settled around the 15th century. In 1444, Portuguese created a colony there. By 1536, the colony was being used to as part of the slave trade. Between 1588 and 1677, the area was fought over by many countries. During this time it was under the control of the Portuguese, Dutch, English, and finally the French.

In 1857, the French built a military base here. This base was called Dakar. It was made the capital of French West Africa in 1902. Dakar was one of the major cities of the French Empire during this time. It was very important in terms of trade, military, and communications to the empire until World War II. 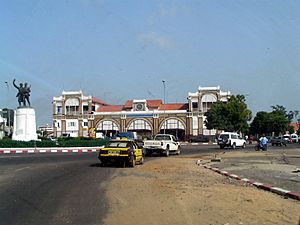 The town serves as a port and is home to the Léopold Sédar Senghor International Airport. It is also the terminus of the Dakar-Niger railroad line.

Dakar is the finishing point of the Dakar Rally and is a member of the Organization of World Heritage Cities. Cheikh Anta Diop University, also known as the University of Dakar, was established in 1957.

All content from Kiddle encyclopedia articles (including the article images and facts) can be freely used under Attribution-ShareAlike license, unless stated otherwise. Cite this article:
Dakar Facts for Kids. Kiddle Encyclopedia.