Taipei City (Chinese: 臺北市) is the capital city of the Republic of China, known by most people simply as Taiwan. It is the largest city in Taiwan. It has a humid subtropical climate (Cfa in the Köppen climate classification). Its population in 2014 was about 2.7 million people. Its mayor is Ko Wen-je. 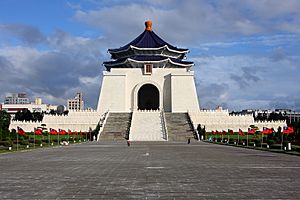 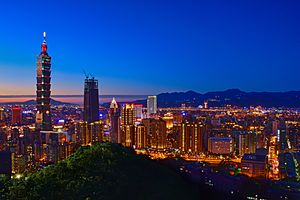 In 1626, Spanish people took over and started to spread their religion. The Dutch moved out Spanish and took over their fortresses than the Dutch started their trading business. In 1661 Koxinga came to Taiwan and expel the Dutch. And he started to reclaim Taiwan, used a system called Tuntian (a state-promoted method of agriculture), it successfully help Taipei to grow more food. Taipei officially became part of the Tianxing county of China.

In 1683 Taiwan got marked as part of the Qing Dynasty. Therefore, a lot of Chinese moved into Taipei, so there were many villages and streets formed, like the Mengjia, Shilin Street, Xikou Street and Dadaocheng. Dadaocheng is a place that produces tea, it has an important impact on how Taipei became prosperous. It was the biggest external trade port that . Foreign countries started to set their business stores in Taipei. 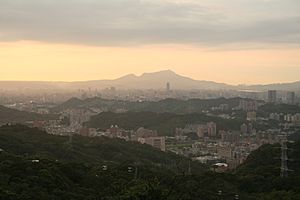 The city of Taipei, as seen from Maokong. 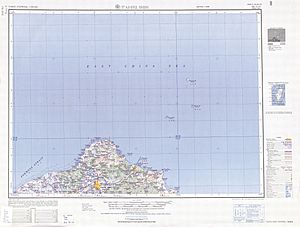 Taipei City is located in the Taipei Basin in northern Taiwan. It is bordered by the Xindian River on the south and the Tamsui River on the west. The generally low-lying terrain of the central areas on the western side of the municipality slopes upward to the south and east and especially to the north, where it reaches 1,120 metres (3,675 ft) at Qixing Mountain, the highest (inactive) volcano in Taiwan in Yangmingshan National Park. The northern districts of Shilin and Beitou extend north of the Keelung River and are bordered by Yangmingshan National Park. The Taipei city limits cover an area of 271.7997 km2 (104.9425 sq mi), ranking sixteenth of twenty-five among all counties and cities in Taiwan.

Two peaks, Qixing Mountain and Mt. Datun, rise to the northeast of the city. Qixing Mountain is located on the Tatun Volcano Group and the tallest mountain at the rim of the Taipei Basin, with its main peak at 1,120 metres (3,670 ft). Mt. Datun's main peak is 1,092 metres (3,583 ft). These former volcanoes make up the western section of Yangmingshan National Park, extending from Mt. Datun northward to Mt. Caigongkeng. Located on a broad saddle between two mountains, the area also contains the marshy Datun Pond.

To the southeast of the city lie the Songshan Hills and the Qingshui Ravine, which form a barrier of lush woods.

Panoramic view of the skyline of Xinyi Special District (Taipei) skyline at night.

Taipei City is divided into 12 districts. 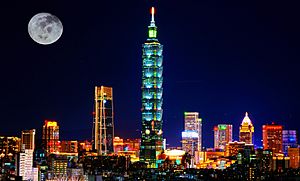 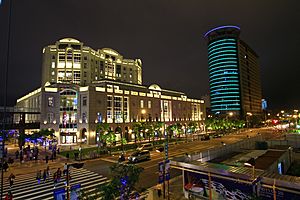 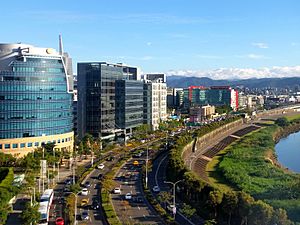 As Taiwan's business, financial, and technology hub, Taipei has been at the center of rapid economic development in the country and has now become one of the global cities in technology and electronics. This development is part of the so-called Taiwan Miracle which has seen dramatic growth in the city following foreign direct investment in the 1960s.

Taipei's main development fields include the information and communications technology (hardware and software), biotechnology, general merchandising (wholesale/retail), financial services, and MICE industries. Most of the country's major firms are based there including Asus, CTBC Bank, Fubon Financial Holding, Tatung Company, D-Link, and others.

5 Global Fortune 500 companies are headquartered in Taipei. The city also attracts many multi-national corporations, international financial institutions, foreign consulates, and business organizations to set up base there. Thus, Taipei has nearly 3,500 registered foreign businesses and attracts over 50% of the total foreign investment in Taiwan. Foreign companies with offices or regional headquarters in Taipei include Google, Microsoft, IBM, Intel, HSBC, Citibank, Facebook, Amazon, Apple, JP Morgan, PwC, and many others. Most financial and foreign firms like to reside in the central business district of Taipei, the Xinyi Special District. With Citi, JP Morgan, DBS Bank, Cathay Life Insurance, Shin Kong Commercial Bank, Hua Nan Bank, and soon Fubon Financial and Nan Shan Life Insurance all establishing skyscrapers in the area. Meanwhile, technology and electronics companies are often colocated in the Neihu Technology Park or the Nankang Software Park. The startup and innovation scene in Taipei is also very vibrant. In 2018 alone, Microsoft announced plans to invest US$34 million to create an artificial intelligence R&D center in Taipei, while Google announced it will hire 300 people and train 5,000 more in artificial intelligence for machines. Taipei is currently Google's biggest engineering site in Asia. IBM also announced in 2018 that it will develop a cloud research lab and expand its R&D center in Taipei with eyes on artificial intelligence, blockchain technology, and cloud computing. According to the 2016 Global Entrepreneurship Development Index, Taipei's entrepreneurial spirit ranks 6th worldwide and 1st in Asia. Taipei has more than 400 startups and numerous incubation centers, accelerators, venture capitals, and angel investors. The city's startup ecosystem is valued at US$580 million by Startup Genome in 2018.

Tourism is a small but significant component of the local economy with international visitors totaling almost 3 million in 2008. Taipei has many top tourist attractions and contributes a significant amount to the US$6.8 billion tourism industry in Taiwan.

All content from Kiddle encyclopedia articles (including the article images and facts) can be freely used under Attribution-ShareAlike license, unless stated otherwise. Cite this article:
Taipei Facts for Kids. Kiddle Encyclopedia.