Nuevo León is one of the 31 states which, with Mexico City, compose the 32 Federal Entities of Mexico. It is divided into 51 municipalities and its capital city is Monterrey.

It is located in Northeastern Mexico. It is bordered by the states of Tamaulipas to the north and east, San Luis Potosí to the south, and Coahuila to the west. To the north, Nuevo León has a 15 kilometer (9 mi) stretch of the U.S.–Mexico border adjacent to the U.S. state of Texas.

Besides its capital, other important cities are Guadalupe, Santa Catarina, San Nicolás de los Garza, and San Pedro Garza García, all of which are part of the Monterrey Metropolitan area.

Nuevo León was founded by conquistador Alberto del Canto, although frequent raids by Chichimecas, the natives of the north, prevented the establishment of almost any permanent settlements. Subsequent to the failure of del Canto to populate the area, Luis Carvajal y de la Cueva, at the head of a group of Portuguese and Spanish settlers who were of Jewish descent, requested permission from the Spanish King to attempt to settle the area which would be called the New Kingdom of León and would fail as well. It wasn't until 1596 under the leadership of Diego de Montemayor the colony became permanent. Nuevo Leon eventually became (along with the provinces of Coahuila, Nuevo Santander and Texas) one of the Eastern Internal Provinces in Northern New Spain.

The capital of Nuevo León is Monterrey, the third largest city in Mexico with over four million residents. Monterrey is a modern and affluent city, and Nuevo León has long been one of Mexico's most industrialized states. 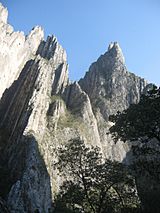 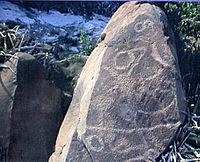 Trace of petroglyphs engraved on rocks at Boca de Potrerillos.

Nuevo León has an extreme climate, and there is very little rainfall throughout the year. The territory covers 64,220 square kilometres (24,800 sq mi), and can be divided into three regions: a hot, dry region in the north, a temperate region in the mountains, and a semi-arid region in the south. The Sierra Madre Oriental mountain range affects in an important way the lay of the land forming the Galeana and Doctor Arroyo plateaus, the Iguana, Picachos, Papagayos, and Santa Clara mountain ranges, and the Pilón, Ascensión, and Río Blanco valleys. As for hydrography, the San Juan River supplies the El Cuchillo dam, which provides water for Monterrey and the metropolitan area. There are also the Cerro Prieto, La Boca, Vaquerías, Nogalitos, and Agualeguas dams. Laguna de Labradores is a major lake in Nuevo León, and Pozo del Gavilán is a natural well. Both are located in the Galeana municipality. The flora of the region includes brush and pastures in the low regions, and pine and oak trees in the mountains. The fauna includes black bears, mountain lions, javelinas, prairie dogs, foxes, coyotes, and white-tailed deer, along with smaller species.

As of 2015, Nuevo León's population was about 5.119 million. Of these over 90%, or about 4.7 million, of the state's population resides within the Monterrey Metropolitan area, making it the third largest metropolitan area in the country. Life expectancy in the state is high, being 73 years for men and 79 years for women.

Ninety-four percent of the total population occupy urban areas, one million of which are home-owners, and 98% have all utilities (running water, sewer systems and electric power). The remaining 2% is mostly the small indigenous population which is isolated and lives in the mountain regions.

Following the nation's tendency, a majority of the population identifies as being Roman Catholic, but it has a sizable Protestant population. 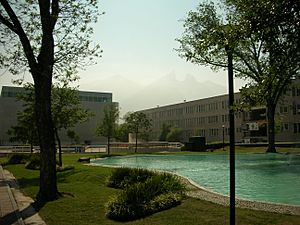 The high quality of life that prevails across the state is reflected on statistical rates such as education, as the entity reports an almost perfect record for finished secondary education, and 13 in 100 inhabitants earn a professional degree. 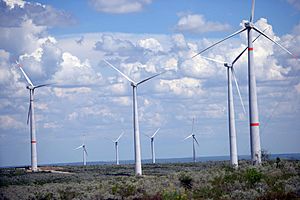 Wind turbines at the Parques Eólicos Ventika located in General Bravo. The wind-power complex has the capacity to produce 252 megawatts per hour and can meet the electricity demand of some 630,000 homes.

Highly industrialized, Nuevo León possesses a standard of living similar to that of countries such as Croatia, Slovakia or Poland. 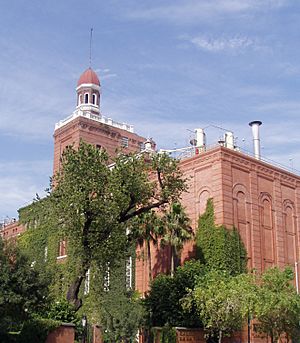 The facilities of the Cervecería Cuauhtémoc Moctezuma brewery in Nuevo Leon are the single largest producer of alcoholic beverages in the world.

Nuevo León boasts a rich agricultural core, called the "orange belt", which comprises the municipalities of Allende, Montemorelos, Hualahuises, General Terán and Linares. Small but productive investments have been transforming traditional harvests (mainly based on orange and cereals) into agroindustrial developments that are producing increasing revenues for the local economy.

Most of The South of the state is at the mercy of a very dry weather that represents a major hurdle for agriculture and livestock.

In recent years, the state government has been making efforts in attracting significant investments in aeronautics, biotechnology, mechatronics, information and communication technologies fields with the creation of the Research and Technology Innovation Park PIIT (Parque de Investigación e Innovación Tecnológica), a technology park oriented in the development, innovation and research of sciences. The project is one of the key strategies within the Monterrey, City of Knowledge program.

Nuevo León has many biomes, which is why it has different climates. Some areas in the mountains are very cold in winter and temperate in summer. In the northern part of the state the climate is arid as a result of the proximity to the Chihuahuan desert. Extreme high temperatures of 47 °C or more occur on the desert areas while winters are short and mild. In Monterrey the climate is hot semi-arid with extreme hot summers and mild winters. There is very little rainfall throughout the year, usually about 500 mm or less.

The state has agreements with other states, provinces, regions and autonomous communities.

All content from Kiddle encyclopedia articles (including the article images and facts) can be freely used under Attribution-ShareAlike license, unless stated otherwise. Cite this article:
Nuevo León Facts for Kids. Kiddle Encyclopedia.