Mexico City is the capital and largest city in Mexico. It is also one of the most populous and polluted cities in the world. The Aztec people were here before the Spanish came and made Mexico City. It was founded in 1521 by Hernán Cortés. Today, about 8.5 million people live in the city, and about 18 million live in the Greater Mexico City urban area. The city of Mexico City ceased to exist in 1928. Since then, there is only the Federal District.

Mexico City has 18.1 million people. It is the city with the second highest number of people in the world after Tokyo in Japan and just slightly more populated than Mumbai in India.

Mexico City was first built in the 1520s after Hernán Cortés destroyed the Aztec city of Tenochtitlan. The Spaniards then emptied the basin of Lake Texcoco to keep it from flooding. By the late 1700s, Mexico City had over 100,000 people. However, there were many slums, which caused epidemics. There were political problems in the mid 1800s after Mexico became independent. More than 40 people ruled in the 40 years after the country became independent. In the late 1800s and early 1900s, electric light and gas were brought to the city. But there was a big difference between the rich western part of the city and the poor eastern part of the city. By 1930, Mexico City had 1,000,000 people. The city kept growing quickly. In 1968, the olympics were in Mexico City. In 1985, an earthquake hit the capital. In the past few decades, there have been problems with crime and corruption. 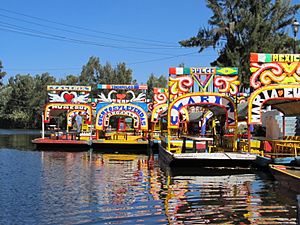 Originally much of the valley laid beneath the waters of Lake Texcoco, a system of interconnected salt and freshwater lakes. The Aztecs built dikes to separate the fresh water used to raise crops in chinampas and to prevent recurrent floods. These dikes were destroyed during the siege of Tenochtitlan, and during colonial times the Spanish regularly drained the lake to prevent floods. Only a small section of the original lake remains, located outside the Federal District, in the municipality of Atenco, State of Mexico.

Architects Teodoro González de León and Alberto Kalach along with a group of Mexican urbanists, engineers and biologists have developed the project plan for Recovering the City of Lakes. If approved by the government the project will contribute to the supply of water from natural sources to the Valley of Mexico, the creation of new natural spaces, a great improvement in air quality, and greater population establishment planning. 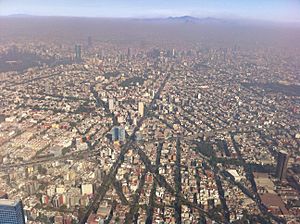 By the 1990s Mexico City had become infamous as one of the world's most polluted cities; however, the city has become a model for dramatically lowering pollution levels. By 2014 carbon monoxide pollution had dropped dramatically, while levels of sulfur dioxide and nitrogen dioxide were nearly three times lower than in 1992. The levels of signature pollutants in Mexico City are similar to those of Los Angeles. Despite the cleanup, the metropolitan area is still the most ozone-polluted part of the country, with ozone levels 2.5 times beyond WHO-defined safe limits.

To clean up pollution, the federal and local governments implemented numerous plans including the constant monitoring and reporting of environmental conditions, such as ozone and nitrogen oxides. When the levels of these two pollutants reached critical levels, contingency actions were implemented which included closing factories, changing school hours, and extending the A day without a car program to two days of the week. The government also instituted industrial technology improvements, a strict biannual vehicle emission inspection and the reformulation of gasoline and diesel fuels. The introduction of Metrobús bus rapid transit and the Ecobici bike-sharing were among efforts to encourage alternate, greener forms of transportation.

Mexico City was originally built on a lake, Lake Texcoco, which is now mostly drained. The ecology of the area has been much changed by the draining. Many of its native species, such as the Axolotl, are extinct, or endangered.

The mountains Popocatépetl and Iztaccíhuatl are nearby.

Mexico City from atop the Torre Latinoamericana

Mexico City is in the tropics. But because its elevation is so high, it has a subtropical highland climate (Cwb in the Köppen climate classification). This means temperatures are warm or mild year-round. It is a lot wetter in the summer than in the winter. Some parts of the city get frost in the winter.

All content from Kiddle encyclopedia articles (including the article images and facts) can be freely used under Attribution-ShareAlike license, unless stated otherwise. Cite this article:
Mexico City Facts for Kids. Kiddle Encyclopedia.