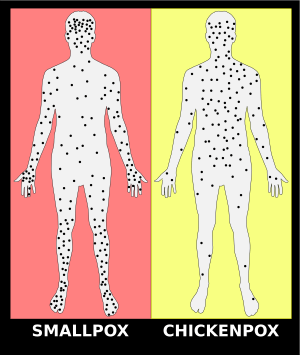 In contrast to the rash in smallpox, the rash in chickenpox occurs mostly on the torso, spreading less to the limbs.

By world agreement, only two stocks of the smallpox pathogen exist: in high-security government laboratories in Russia and the United States. There are concerns, however, that there may be cultures elsewhere, and, since it is transmissible from human to human and has substantial morbidity and mortality, there are worldwide preparations for containing and treating an outbreak. The vaccine, while having significant side effects, can reduce the severity of an active case as well as prevent the disease. At least one antiviral drug, cidofovir, is believed active against it, but has not been used in humans.

Smallpox is believed to have originated in Africa from a rodent that lived along the south Nile River in the crescent green forests. From Africa it then spread to china and India thousands of years ago. During the Egyptian-Hittite war in 1350 B.C. was the first recorded epidemic of Smallpox. Almost Two Thousand years later this disease reached Europe where it plagued the countries from the fifth century until the nineteenth century. From Europe the disease spread to major cities all around the world including the American colonies in the seventeenth and eighteenth centuries.

Smallpox has played a major role in shaping the way western civilization prospered and grew during the middle ages and into modern times. From the tenth century until the eighteenth century Smallpox accounted for more the four-hundred thousand deaths per year. The estimated death toll ranges from 300 to 500 million.

The demise of smallpox came about with the realization that survivors of the illness were immune for the rest of their life. This brought about the practice of Variolation. Variolation is the process of exposing a healthy person to the infected substance in the chance that the healthy person would develop a milder form of the disease and then receive immunity.

After centuries of this type of inoculation eventually it was refined by professional doctors and turned into a very effective and “safe” process. A study was done in Boston where 12,000 people contracted the disease. Of these fourteen percent that were not inoculated died. Of those who had variolation performed only two percent died from naturally contracted the disease. These statistics dramatically increase the number of people who had variolation performed on themselves.

After centuries of the practice of inoculation by variolation had developed it was time for a new era to come about.

It all started when a young boy name Edward Jenner’s was inoculated with the virus along with thousands of other boys. Edward spent his life studying many different fields of science and was very successful. He developed new ways of thinking and new forms of scientific method. However his most meaningful study came from his interest in the idea that cowpox brings immunity to smallpox. He had heard many rumors that dairy maids, after being infected with cowpox, a lesser virus similar to smallpox, received immunity from both diseases. After studying a dairy maid with fresh cowpox lesions on her hand he saw that she was immune to smallpox. After much thought and careful planning he decided to inoculate a boy with fresh cowpox lesions. After a mild case of cowpox occurred he decided to take fresh smallpox and place it on an open wound on the boy. After a few weeks no smallpox had shown up and Edward Jenner concluded that immunity was complete. This discovery paved the way for the eventual eradication of this disease from the world.

Smallpox was named from the small lesions that form on the victims skin.

All content from Kiddle encyclopedia articles (including the article images and facts) can be freely used under Attribution-ShareAlike license, unless stated otherwise. Cite this article:
Smallpox Facts for Kids. Kiddle Encyclopedia.