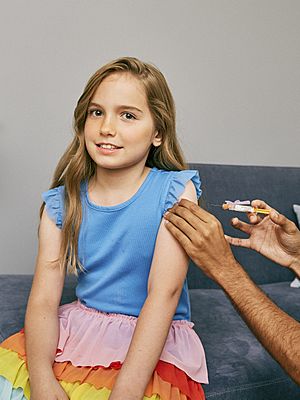 Girl about to be vaccinated in her upper arm 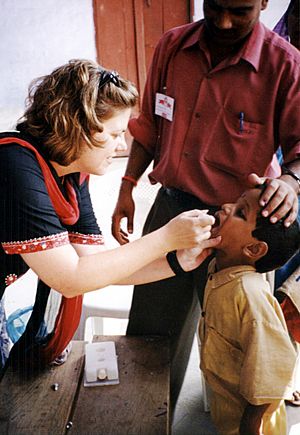 A child in India is being vaccinated against polio.

A vaccination is a treatment which makes the body stronger against an infection.

Another word used for vaccines is immunization. These words mean things that are a little different. Vaccination is when a person is given something to make the immune system learn to fight an infectious disease.

This is important in people too. If 95% of people in a place are immune to a disease, the other 5% are safer. They are not near infected people, so they won't get infected.

So if everyone in a place gets vaccinated, it protects these people too. If they are not protected by herd immunity, they can get more sick from an infection. They get the infection more easily and they get sicker from it. So it is important that people who are healthy get their vaccinations. It protects the healthy people. But it also is important to protect other people who are old, weak, or sick.

There are different types of vaccines:

Today in modern countries almost all people are vaccinated, which has caused many serious diseases to become rare. However, some people argue against vaccination, as they are worried about possible side effects from the vaccination.

Vaccinations do have some side effects. These include swelling and redness around the injection site, a sore arm, or fever. These effects are because of the immune system fighting with the viruses or bacteria which have been injected. Very rarely, the immune system overreacts so much to the virus that the immune system damages other areas in the body.

Overall, the vast majority of medical professionals and scientists believe that vaccinations are a good thing and that the benefits of avoiding diseases are far greater than the very small risk of side effects. All medical organizations around the world, including the World Health Organization(WHO), the American Medical Association, the American Academy of Pediatrics, and the United States Centers for Disease Control support vaccination.

The word "vaccine" was created by Edward Jenner. The word comes from the Latin word vacca, meaning cow. A virus that mainly affects cows (Cowpox) was used in the first scientific demonstration that giving a person one virus could protect against a related and more dangerous one. 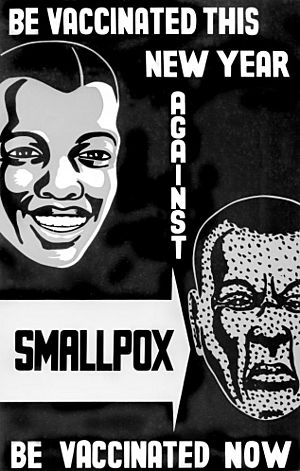 Poster for vaccination against smallpox.

The first vaccination ever was for smallpox. In 1796 an English doctor, Edward Jenner, noticed something. He saw that people who got cowpox did not get sick from smallpox. He gave a young boy the cowpox virus to protect him from smallpox. This was done by scratching liquid from cowpox sores into the boy's skin. This same method using the liquid from sores was also used to give people smallpox. People did this so they might get smallpox on one place on their bodies. Then they could pick which body part got scars from smallpox. But sometimes people who did this got very sick from smallpox. Some even died. This was a dangerous thing to do. But people did it because it was less dangerous than getting smallpox.

Edward Jenner gave the boy cowpox in the same way people tried to give smallpox. Six weeks later, he scratched smallpox into the boy's skin. The boy did not get sick from smallpox. This boy was the first person ever to get a vaccination.

It was not almost 100 years after the smallpox vaccination the medicine was found the next vaccination for cholera in 1879. After that, vaccines for 28 different types of diseases have been found.

All content from Kiddle encyclopedia articles (including the article images and facts) can be freely used under Attribution-ShareAlike license, unless stated otherwise. Cite this article:
Vaccination Facts for Kids. Kiddle Encyclopedia.