Gillray has been called "the father of the political cartoon", with his works targeted at George III, prime ministers and generals. Regarded as being one of the most influential cartoonists, Gillray's wit and humour, knowledge of life, keen sense of the humorous, gave him the first place among caricaturists. 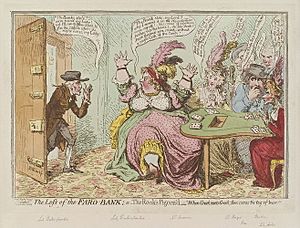 Gillray's caricatures are generally divided into two classes, the political series and the social. The political caricatures comprise an important and invaluable component of the history of the latter part of the reign of George III. They were circulated not only in Britain but also throughout Europe, and exerted a powerful influence both in Britain and abroad.

Auction prices for Gillray's work have increased since the 1970s. At the auction of the Draper Hill Collection at Phillips auctioneers in London in 2001, several key prints sold for more than US$10,000. Since 2002, annual auctions of Caricatures at Bonhams in London, each of which included large selections of Gillray prints, have continued this trend. One painting sold in 2006 for over US$9,000, while another sold in the same year for over US$20,000.

All content from Kiddle encyclopedia articles (including the article images and facts) can be freely used under Attribution-ShareAlike license, unless stated otherwise. Cite this article:
James Gillray Facts for Kids. Kiddle Encyclopedia.