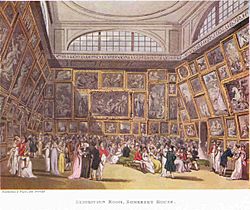 An early Summer Exhibition at the Academy's original home in Somerset House. 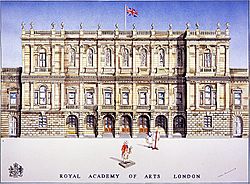 The Royal Academy (RA), is an art institution based in Burlington House, Piccadilly, London. It is a club for top painters and sculptors. They elect their own members, and give regular exhibitions of art works.

The Royal Academy was formed to rival the Society of Artists after an leadership dispute between two leading architects, Sir William Chambers and James Paine. Paine won, but Chambers used his strong connections with King George III to create the Royal Academy, in 1768. It was formally launched the following year.

Sir Joshua Reynolds was its first president, and Benjamin West its second.

All content from Kiddle encyclopedia articles (including the article images and facts) can be freely used under Attribution-ShareAlike license, unless stated otherwise. Cite this article:
Royal Academy of Arts Facts for Kids. Kiddle Encyclopedia.