John Constable, (11 June 1776 – 31 March 1837) was an English landscape painter in the naturalistic tradition. Born in Suffolk, he is known principally for his landscape paintings of Dedham Vale, the area surrounding his home — now known as "Constable Country" — which he invested with an intensity of affection. "I should paint my own places best", he wrote to his friend John Fisher in 1821, "painting is but another word for feeling".

His most famous paintings include Wivenhoe Park of 1816,Dedham Vale of 1802 and The Hay Wain of 1821. Although his paintings are now among the most popular and valuable in British art, Constable was never financially successful. He did not become a member of the establishment until he was elected to the Royal Academy at the age of 52. His work was embraced in France, where he sold more works than in his native England.

The French artist Delacroix and the Barbizon School were influenced by Constable and followed his lead in doing outdoor sketches. The French Impressionists also built on Constable's techniques in capturing the moods of light. 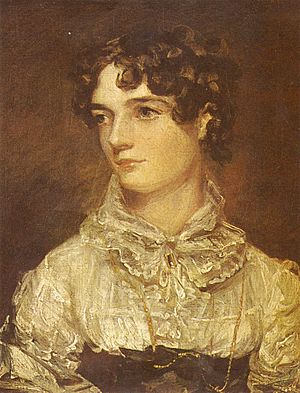 Constable loved Maria Bicknell, a local girl whose solicitor father was acquainted with the king, and who did not consider Constable good enough for his daughter. After five years, he finally gave his consent to the marriage in 1816.

John and Maria's marriage in October 1816 at St Martin-in-the-Fields was followed by a honeymoon tour of the south coast. The sea at Weymouth and Brighton inspired Constable to develop new techniques of brilliant colour and vivacious brushwork. At the same time, a greater emotional range began to be expressed in his art.

After the birth of their seventh child in January 1828, Maria fell ill and died of tuberculosis on 23 November at the age of 41, an event which devastated her husband. 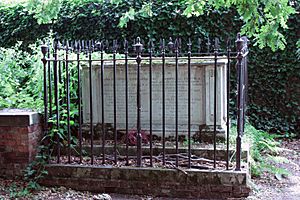 In 1835, his last lecture to students of the Royal Academy, in which he praised Raphael and called the Academy the "cradle of British art", was "cheered most heartily". He died on the night of 31 March 1837, apparently from heart failure, and was buried with Maria in the graveyard of St John-at-Hampstead, Hampstead. (His children John Charles Constable and Charles Golding Constable are also buried in this family tomb.)

All content from Kiddle encyclopedia articles (including the article images and facts) can be freely used under Attribution-ShareAlike license, unless stated otherwise. Cite this article:
John Constable Facts for Kids. Kiddle Encyclopedia.