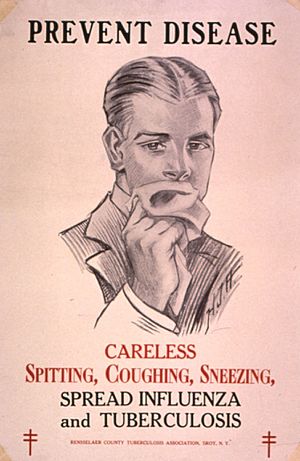 Public health campaigns in the 1920s tried to halt the spread of TB.

Tuberculosis (TB) is an infectious disease caused by bacteria. In the past, people called it consumption.

TB is caused by several types of mycobacteria, usually Mycobacterium tuberculosis. The disease usually attacks the lungs, but it can also affect other parts of the body.

The bacteria can travel through the air and spread from one person to the next. This happens when infected people cough, sneeze, or spit.

Of every 100 people with TB, between five and ten people show symptoms. In these people, the disease is called active. Tuberculosis kills more than half of the people who are infected if they do not get treatment.

A close up of a culture of Mycobacterium tuberculosis. The patches that look like foam are the typical growth pattern of these bacteria

Diagnosis of active TB relies on radiology. Doctors often look at an X-ray of the chest. In addition, they check body fluids. These fluids have microbes in them, which are grown in cell cultures. The cell cultures are then analysed to see if the person is infected with TB.

If the patient has TB but does not show symptoms, the disease is 'latent'. Doctors use a skin test, called the Mantoux test, to detect latent TB. They often do blood tests too.

There is a vaccine against some forms of tuberculosis. It is called bacillus Calmette–Guérin vaccine.

TB used to be easily treated and cured with antibiotics. However, the bacterium is now highly resistant to most antibiotics. This resistance makes treatment difficult. Many different kinds of antibiotics need to be given over a long period of time. There is a form of tuberculosis that is resistant to all drugs.

Tuberculosis can have many symptoms. The most common include:

People are also more likely to get tuberculosis if they live close to other people who have TB. For example, TB can spread easily in homeless shelters, prisons, and immigrant communities.

How common is TB?

This world map shows the prevalence of TB, per 100.000 people, as of 2007. Countries with more cases are shown yellow, those with fewer cases are shown in blue. The most cases were recorded in Sub-Saharan Africa, many occurred in Asia as well.

Experts believe that one third of the world population is infected with M. tuberculosis. New infections occur at a rate of one per second. In 2007, about 13.7 million chronic cases were active globally. In 2010, about 8.8 million new cases developed and nearly 1.5 million people died from the disease, most of them in developing countries. The number of tuberculosis cases has been decreasing since 2006, and new cases have decreased since 2002.

Tuberculosis does not happen at the same rate around the world. About eighty percent of the population in many Asian and African countries test positive for TB, but only five to ten percent of people in the United States do.

All content from Kiddle encyclopedia articles (including the article images and facts) can be freely used under Attribution-ShareAlike license, unless stated otherwise. Cite this article:
Tuberculosis Facts for Kids. Kiddle Encyclopedia.