Edgar Allan Poe was born on January 19, 1809. His parents were two touring vaudeville actors, David Poe Jr. and Elizabeth Arnold Hopkins. David left the family under unknown circumstances whilst Poe was an infant. When Poe was two his mother died of tuberculosis, leaving Edgar an orphan. The wealthy John Allan took Edgar into his home in Richmond, Virginia. In 1815, the Allan family moved to England. Young Poe went to an English private school. After five years, the family moved back to Richmond, Virginia.

After moving back to Virginia, Poe entered the University of Virginia in 1826. While there, he gambled, lost money, and went into debt. John Allan became angry, and cut off all contact with Poe. In 1827, Poe published his first work, a collection of poetry titled, Tamerlane and Other Poems. Poe did not have his name published in the book; it was attributed to "a Bostonian."

Poe enlisted in the army. He used the name Edgar A. Perry and lied about his age. He was successful as a soldier and quickly became a sergeant major. While in the army his foster-mother Frances Allan died. Poe attempted to mend his relationship with John Allan. Poe soon left the army and enrolled at West Point in New York state.

Poe did not enjoy his time at West Point and got very bored. He was expelled in March 1831. At this point, John Allan disowned him. Poe was well-liked by other cadets. They contributed money to pay for Poe to publish a book of his poems called Al Aaraaf, Tamerlane, and Minor Poems. He soon moved to Baltimore, Maryland.

In Baltimore, Poe lived with his aunt, Maria Poe Clemm. She was the sister of Edgar's real father. Clemm also had a daughter named Virginia Clemm. Virginia admired Poe very much. In 1836, when Virginia was thirteen, she married Poe.

Poe was writing a lot by this time. He sold his first short story in 1832. His writing did not earn very much money. He also worked as an editor for various magazines over the years, becoming very well known for his literary criticism. Poe also was drinking off and on during these years.

In 1842, while Poe was living with Clemm and Virginia in Philadelphia, Pennsylvania, Virginia became sick with tuberculosis. The family moved to the New York City area in 1843 before settling in The Bronx. On January 29, 1845, Poe published his most famous poem, "The Raven", making him very popular. Virginia died a couple years later on January 30, 1847.

Poe's death is very mysterious. On September 27 1849, Poe left Richmond after a short visit. It is unknown what happened to him until October 3, when he was discovered outside of Gunner's Hall by a man named Joseph W. Walker in Baltimore. He was taken to Washington College Hospital. While in the hospital he became delirious and started seeing hallucinations. He died on October 7, 1849, in the hospital. Though it is not known what was his cause of death, there are several possible theories, including congestion of the brain, alcohol withdrawal, tuberculosis, and rabies.

Poe was buried in the grounds of the Westminster Church and Burying Ground after a small funeral with only a few people. On May 17, 1875, Poe was reburied at the front of the churchyard after a city-wide campaign to raise money to build a large monument. He is buried there alongside his wife Virginia, and Virginia's mother Maria Clemm. 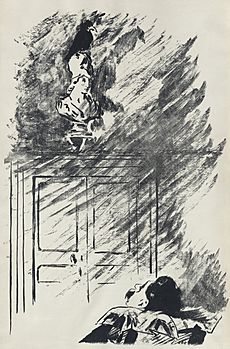 Illustration by French impressionist Édouard Manet for the Stéphane Mallarmé translation of "The Raven", 1875. Digitally restored. 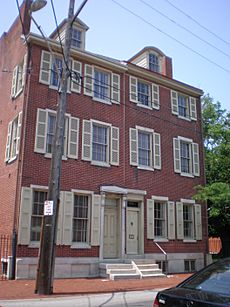 The Edgar Allan Poe National Historic Site in Philadelphia is one of several preserved former residences of Poe.

No childhood home of Poe is still standing, including the Allan family's Moldavia estate. The oldest standing home in Richmond, the Old Stone House, is in use as the Edgar Allan Poe Museum, though Poe never lived there. The collection includes many items that Poe used during his time with the Allan family, and also features several rare first printings of Poe works. 13 West Range is the dorm room that Poe is believed to have used while studying at the University of Virginia in 1826; it is preserved and available for visits. Its upkeep is now overseen by a group of students and staff known as the Raven Society.

In Boston, a commemorative plaque on Boylston Street is several blocks away from the actual location of Poe's birth. The house which was his birthplace at 62 Carver Street no longer exists; also, the street has since been renamed "Charles Street South". A "square" at the intersection of Broadway, Fayette, and Carver Streets had once been named in his honor, but it disappeared when the streets were rearranged. In 2009, the intersection of Charles and Boylston Streets (two blocks north of his birthplace) was designated "Edgar Allan Poe Square". In March 2014, fundraising was completed for construction of a permanent memorial sculpture at this location. The winning design by Stefanie Rocknak depicts a life-sized Poe striding against the wind, accompanied by a flying raven; his suitcase lid has fallen open, leaving a "paper trail" of literary works embedded in the sidewalk behind him. The public unveiling on October 5, 2014 was attended by former US poet laureate Robert Pinsky.

Other Poe landmarks include a building in the Upper West Side where Poe temporarily lived when he first moved to New York. A plaque suggests that Poe wrote "The Raven" here. The bar still stands where legend says that Poe was last seen drinking before his death, in Fells Point in Baltimore. The drinking establishment is now known as "The Horse You Came In On", and local lore insists that a ghost whom they call "Edgar" haunts the rooms above.

All content from Kiddle encyclopedia articles (including the article images and facts) can be freely used under Attribution-ShareAlike license, unless stated otherwise. Cite this article:
Edgar Allan Poe Facts for Kids. Kiddle Encyclopedia.