University of Virginia facts for kids 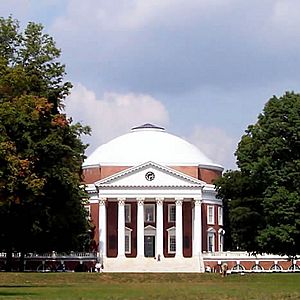 The University of Virginia is a public research university in Charlottesville, Virginia, United States.

The buildings designed by Jefferson are a UNESCO World Heritage Site.

It was founded by Thomas Jefferson. It was conceived by 1800 and established in 1819.

All content from Kiddle encyclopedia articles (including the article images and facts) can be freely used under Attribution-ShareAlike license, unless stated otherwise. Cite this article:
University of Virginia Facts for Kids. Kiddle Encyclopedia.