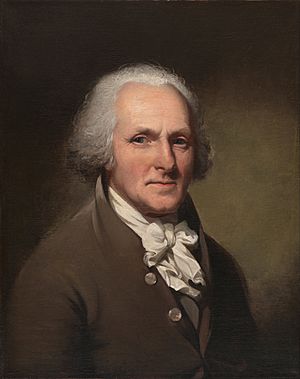 Self-portrait of Peale (c. 1791) at the National Portrait Gallery in Washington, D.C.

Charles Willson Peale (April 15, 1741 – February 22, 1827) was an American painter, soldier, scientist, inventor, politician and naturalist. He is best remembered for his portrait paintings of leading figures of the American Revolution, and for establishing one of the first museums in the United States.

Peale was born in 1741 between modern-day Queenstown and Centreville, Queen Anne's County, Maryland, the son of Charles Peale and his wife Margaret. He had a younger brother, James Peale (1749–1831). Charles became an apprentice to a saddle maker when he was fourteen years old. Upon reaching maturity, he opened his own saddle shop and joined the Sons of Liberty. However, he was unsuccessful in saddle making. He then tried fixing clocks and working with metals, but both of these endeavors failed as well. He then took up painting.

Career as a painter

Finding that he had a talent for painting, especially portraiture, Peale studied for a time under John Hesselius and John Singleton Copley. John Beale Bordley and friends eventually raised enough money for him to travel to England to take instruction from Benjamin West. Peale studied with West for three years beginning in 1767, afterward returning to America and settling in Annapolis, Maryland. There, he taught painting to his younger brother, James Peale, who in time also became a noted artist. 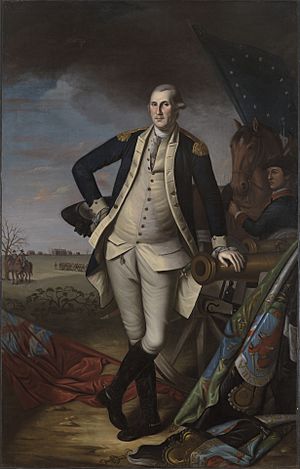 Peale's enthusiasm for the nascent national government brought him to the capital, Philadelphia, in 1776, where he painted portraits of American notables and visitors from overseas. His estate, which is on the campus of La Salle University in Philadelphia, can still be visited. He also raised troops for the War of Independence and eventually gained the rank of captain in the Pennsylvania militia by 1776, having participated in several battles. While in the field, he continued to paint, doing miniature portraits of various officers in the Continental Army. He produced enlarged versions of these in later years. He served in the Pennsylvania state assembly in 1779–1780, after which he returned to painting full-time.

Peale was quite prolific as an artist. While he did portraits of scores of historic figures (such as James Varnum, Benjamin Franklin, John Hancock, Thomas Jefferson, and Alexander Hamilton), he is probably best known for his portraits of George Washington. The first time Washington sat for a portrait was with Peale in 1772, and they had six other sittings; using these seven as models, Peale produced altogether close to 60 portraits of Washington. In January 2005, a full-length portrait of Washington at Princeton from 1779 sold for $21.3 million, setting a record for the highest price paid for an American portrait.

One of his most celebrated paintings is The Staircase Group (1795), a double portrait of his sons Raphaelle and Titian, painted in the trompe l'oeil style. It is in the collection of the Philadelphia Museum of Art. 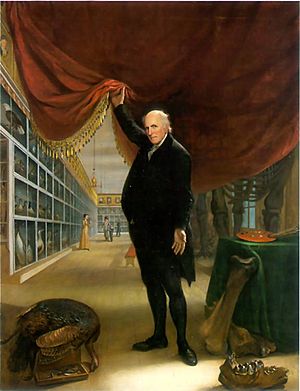 The Artist in His Museum (self-portrait, 1822) is displayed at the Pennsylvania Academy of the Fine Arts in Philadelphia.

Peale had a great interest in natural history, and organized the first U.S. scientific expedition in 1801. These two major interests combined in his founding of what became the Philadelphia Museum, later known as Peale's American Museum. It housed a diverse collection of botanical, biological, and archaeological specimens.

The museum contained a large variety of birds which Peale himself acquired, and in many instances mounted, having taught himself taxidermy. In 1792, Peale initiated a correspondence with Thomas Hall, of the Finsbury Museum, City Road, Finsbury, London proposing to purchase British stuffed items for his museum. Eventually, an exchange system was established between the two, whereby Peale sent American birds to Hall in exchange for an equal number of British birds. This arrangement continued until the end of the century. The Peale Museum was the first to display a mastodon skeleton (which in Peale's time were referred to as mammoth bones; these common names were amended by Georges Cuvier in 1800, and his proposed usage is that employed today) that Peale found in New York State. Peale worked with his son to mount the skeleton for display.

The Staircase Group (1795), a trompe l'oeil by Peale depicting his sons Raphaelle and Titian Peale I

The display of the "mammoth" bones entered Peale into a long-standing debate between Thomas Jefferson and Comte de Buffon. Buffon argued that Europe was superior to the Americas biologically, which was illustrated through the size of animals found there. Jefferson referenced the existence of these "mammoths" (which he believed still roamed northern regions of the continent) as evidence for a greater biodiversity in America. Peale's display of these bones drew attention from Europe, as did his method of re-assembling large skeletal specimens in three dimensions.

The museum was among the first to adopt Linnaean taxonomy. This system drew a stark contrast between Peale's museum and his competitors who presented their artifacts as mysterious oddities of the natural world.

The museum underwent several moves during its existence. At various times it was located in several prominent buildings including Independence Hall and the original home of the American Philosophical Society.

The museum would eventually fail, in large part because Peale was unsuccessful at obtaining government funding. After his death, the museum was sold to, and split up by, showmen P. T. Barnum and Moses Kimball. 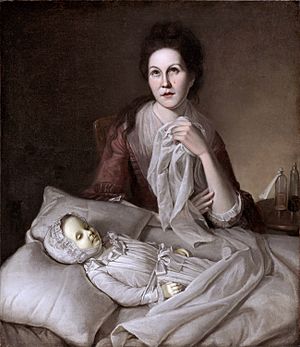 Rachel, his first wife, weeping over their daughter Margeret, who died of smallpox (Charles Willson Peale, 1772–1776)

After Rachel's death in 1790, Peale married Elizabeth de Peyster (d. 1804) the next year. With his second wife, he had six additional children. One son, Franklin Peale, born on October 15, 1795, became the Chief Coiner at the Philadelphia Mint. Their youngest son, Titian Ramsay Peale (1799–1885), became an important naturalist and pioneer in photography. Their daughter, Elizabeth De Peyster Peale (1802–57), married William Augustus Patterson (1792–1833) in 1820.

Hannah More, a Quaker from Philadelphia, married Peale in 1804, becoming his third wife. She helped raise the younger children from his previous two marriages.

Peale's slave, Moses Williams, was also trained in the arts while growing up in the Peale household and later became a professional silhouette artist. 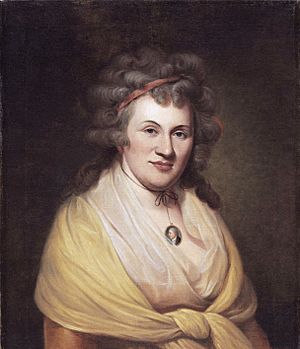 In 1810, Peale purchased a farm in Germantown where he intended to retire. He named this estate 'Belfield', and cultivated extensive gardens there. After Hannah's death in 1821, Peale lived with his son Rubens and sold Belfield in 1826. Peale died on February 22, 1827, and was buried at the Saint Peter's Episcopal Church in Philadelphia.

A Renaissance man, Peale had expertise not only in painting but also in many diverse fields, including carpentry, dentistry, optometry, shoemaking, and taxidermy. In 1802, John Isaac Hawkins patented the second official physiognotrace, a mechanical drawing device, and partnered with Peale to market it to prospective buyers. Peale sent a watercolor sketch of the physiognotrace, along with a detailed explanation, to Thomas Jefferson. The drawing is now held with the Jefferson Papers in the Library of Congress.

Around 1804, Peale obtained the American patent rights to the polygraph from its inventor John Isaac Hawkins, about the same time as the purchase of one by Thomas Jefferson. Peale and Jefferson collaborated on refinements to this device, which enabled a copy of a handwritten letter to be produced simultaneously with the original.

Peale wrote several books, among which were An Essay on Building Wooden Bridges (1797) and An Epistle to a Friend on the Means of Preserving Health (1803). Peale named all of his sons for artists or scientists, and taught them to paint. Three of them, Rembrandt, Raphaelle, and Titian, became noted artists in their own right.

He was the brother-in-law of Nathaniel Ramsey, a delegate to the Congress of the Confederation.

All content from Kiddle encyclopedia articles (including the article images and facts) can be freely used under Attribution-ShareAlike license, unless stated otherwise. Cite this article:
Charles Willson Peale Facts for Kids. Kiddle Encyclopedia.