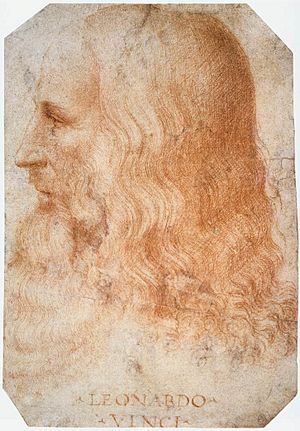 Portrait of Leonardo Da Vinci by his pupil, Menzi

The term Renaissance man or polymath is used for a very clever person who is good at many different things. The idea comes from a time of history called the Renaissance which lasted from about 1400 to about 1600. One of the most famous people alive during this time was Leonardo da Vinci. He was most famous as a painter, but he was also a scientist, engineer and mathematician. Leonardo is called a "Renaissance man". Another "Renaissance man" was Michelangelo, who was a sculptor, painter, architect and poet.

All content from Kiddle encyclopedia articles (including the article images and facts) can be freely used under Attribution-ShareAlike license, unless stated otherwise. Cite this article:
Renaissance man Facts for Kids. Kiddle Encyclopedia.