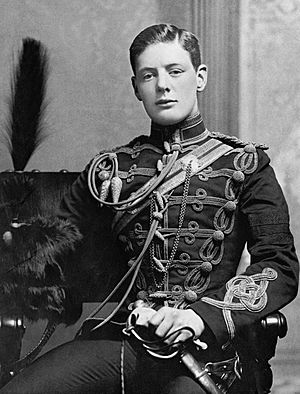 Churchill in military uniform in 1895 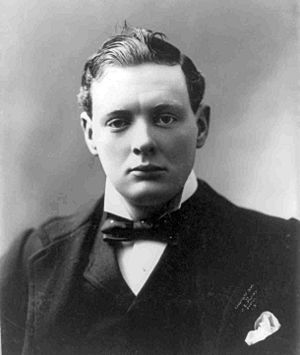 Sir Winston Leonard Spencer-Churchill KG OM CH TD FRS PC (30 November 1874 – 24 January 1965) was an English politician. He was Prime Minister of the United Kingdom twice, once during World War II, and again in the early 1950s.

Churchill is the only person to have been a member of the British Government during both World Wars, and the last commoner (non-royal) to be granted a state funeral. He was also a soldier, journalist, and author. He won the Nobel Prize in literature in 1953.

Churchill featured in two media polls. He was ranked as the greatest British prime minister of the twentieth century by 20 prominent historians, politicians and commentators. They were asked by BBC Radio 4's The Westminster Hour to rank the 19 prime ministers from Lord Salisbury at the turn of the century through to John Major in the 1990s. In a 2002 BBC 2 television poll, Churchill was ranked as the greatest Briton in history. A million votes were cast, and the voting was heavily influenced by public campaigns for various candidates.

He is the only British Prime Minister to have received the Nobel Prize.

Winston Churchill was born on 30 November 1874 at Blenheim Palace, Oxfordshire, England, the home of the Dukes of Marlborough. His father, Lord Randolph Churchill, was a younger son of the 7th Duke, and a leading Tory politician. His mother (née Jenny Jerome) was American.

As a boy, Churchill went to the famous Harrow School. He did not get good results, but said he was good at fighting.

He joined the British Army, in 1893. In 1896, he was transferred to Bombay, in what was the Indian Empire (British India). He fought in what is now Pakistan. After this, he fought in a war in Sudan, in 1898 as an officer in the cavalry. In 1899, he went to the Second Boer War in South Africa, to be a newspaper reporter. He was captured by the Boers, but managed to escape.

In 1900, he became a politician in the Conservative Party, and was elected to Parliament. In 1904, he changed parties and joined the Liberal Party, but later returned to the Conservative Party. He married Clementine Hozier in 1908, and had 5 children named Diana, Randolph, Sarah, Marigold and Mary.

In 1910 Churchill became Home Secretary, one of the most important members of the government. In 1911 he was made First Lord of the Admiralty, which put him in charge of the Royal Navy. When World War I broke out, he stayed in that job. He organized an invasion in Gallipoli which went wrong, and because of this, he was made to leave the government. He joined the army and was sent to fight in France, although he was still a Member of Parliament. In 1917 he was made minister in charge of military supplies (Minister of Munitions).

In 1921 he was in charge of the colonies as Secretary of State. Soon after, in 1922 he lost in an election. In 1924 he became a member of Parliament again, this time not as a member of any party. In 1925 he joined the Conservative Party again. He became Chancellor of the Exchequer (Minister of Finance) in 1924.

After 1929, Churchill disagreed with many things the Conservative party believed in. He was not given any job in the government. Instead he wrote books. One was called Marlborough: his life and times, about his famous ancestor John Churchill, 1st Duke of Marlborough; another was A History of the English Speaking Peoples, which was not published until after World War 2.

When Adolf Hitler came to power in Germany, Churchill warned that Britain should strengthen its military and oppose Hitler. However, very few leaders agreed with him.

At the start of World War II, Churchill was again put in charge of the Navy. In 1940 the war was going badly for Britain. Prime Minister Neville Chamberlain resigned on May 10 and Churchill was given the job. Some people thought that Britain could not win the war, and that the British government should make peace with Hitler. Churchill was sure that Britain could win, and promised to continue the fight. He made famous speeches that are still remembered today.

He was friends with the President of the United States, Franklin D. Roosevelt. He persuaded Roosevelt to give supplies to Britain, and to help Britain. He had many meetings with Roosevelt and with Joseph Stalin, the leader of the Soviet Union, after they came into the war. They were called the Big Three.

In 1945, his Conservative party lost an election, and he stopped being Prime Minister. However, he became Prime Minister again in 1951, which he was until 1955.

He was knighted in 1953, and became Sir Winston, and also won the Nobel Prize in Literature. 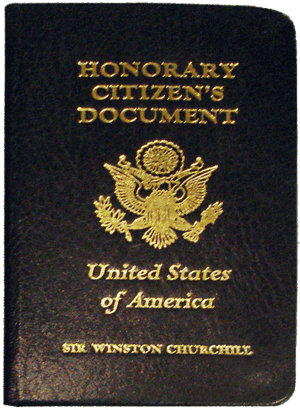 Winston Churchill's identification document as an Honorary Citizen of the United States, provided as a gift from President John F. Kennedy.

In 1963, President John F. Kennedy named him 'Honorary Citizen of the United States' but too ill to attend a White House ceremony, his son and grandson accepted the award.

Sir Winston died of a stroke at the age of 90, in 1965. When he died, his wife Lady Clementine Churchill and other members of the family were at his bedside.

Title (US Title) (Year of publication)

All content from Kiddle encyclopedia articles (including the article images and facts) can be freely used under Attribution-ShareAlike license, unless stated otherwise. Cite this article:
Winston Churchill Facts for Kids. Kiddle Encyclopedia.