Joseph Stalin (or Iosif Vissarionovich Stalin; 18 December 1878  – 5 March 1953) was the leader of the Soviet Union from 1922 until his death. He replaced Vladimir Lenin as leader of the Soviet Union. Stalin was a totalitarian ruler, and stayed in power by removing anyone he thought might be a threat to him. His ideas and policies turned the Soviet Union into a powerful, modern nation, the largest on Earth. It also led to the deaths of millions of people. His form of government was later called Stalinism.

Stalin invaded Poland on 18 September 1939. In the subsequent World War II, Stalin stayed neutral but signed a peace deal with Germany's leader Adolf Hitler. He then led a bloody war after Germany invaded the Soviet Union. The end of the war saw Stalin gain control of all Eastern Europe including part of Germany. There, a series of loyal Marxist-Leninist single-party states were set up, extending his power and determining the Soviet Union's position as a superpower. 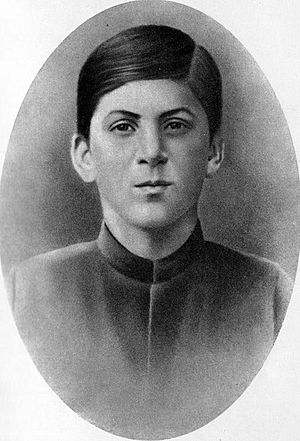 Ioseb Vissarionovich Jugashvili was born in a small one room house in Gori, Georgia. His father made and repaired shoes. His father was often drunk and used to hit his wife and his son until his death in a fight in 1890. Joseph had smallpox when he was young. This left his face scarred. Later, photographs were often changed to hide the scars. His left arm was also shorter because of an accident. He was educated at the Gori church school. Stalin studied to be a priest at a seminary (school for priests) in Tbilisi. He was an active student reading many books, especially books that were not allowed by the seminary. This included books by Karl Marx. He joined a Marxist group in 1898, the Mesame Dasi, or Group Three. 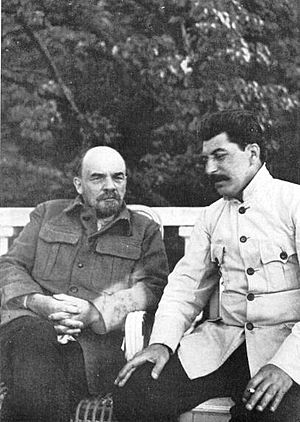 He left school in 1899 and got a job at the Tbilisi Physical Institute. He joined groups that were trying to start a revolution to remove the Tsar. They wanted a different type of government. The police raided his house in 1901 while hunting for people who opposed the government. Stalin escaped but went into hiding so the police could not find him. He organized anti-government activities such as May Day marches and protests. He became a Bolshevik. He supported a violent revolution, and did not support the Mensheviks. The secret police caught him in April 1902 and exiled him without trial to Siberia. He lived in the village of Novaya Uda.

He soon escaped from Siberia. This led to many later claims that he was a police spy. The arrest of another Bolshevik, Stephan Shaumyan, a rival of Stalin, increased these beliefs. At the end of 1905, he went to a meeting in Finland and met Vladimir Ilyich Lenin. Lenin was not what Stalin had expected. The government arrested and exiled Stalin several times in the next ten years. This increased his power in the Bolshevik party and he was elected to the Central Committee of the party in 1912. He was promoted to a position at St.Petersburg.

Stalin was a member of the Bolshevik Party, but did not do much in the Russian Revolution of 1917. He was writing and editing Pravda, the party newspaper. He had a number of organizational jobs in the Communist Party. In 1922 he became General Secretary. He was able to give jobs to people he liked in the Communist Party. These supporters helped him become the leader after Vladimir Lenin died in 1924.

Stalin tried to collectivize farms. Collectivization meant taking the land from owners of all farms and joining it into large farms run by the government. Communist officials then let farmers work the new farms and told them to turn the harvest over to the government.

Collectivization did not work well. There was a famine 1932–33, in which millions died. Because farmers were not paid much money, and whatever they grew went to the state, the workers did not try their best. The best farming worked on very small bits of land given to the peasants to grow what they liked. On these pieces of land, farmers could keep what they grew. In 1938 these parts of land were 4% of Soviet farmland. However, they grew 20% of its produce.

There was a second great famine in the Soviet Union in 1946–1947. The conditions were caused by drought, made worse by the devastation caused by World War II. The grain harvest in 1946 totaled 39.6 million tons - barely 40% of the yield in 1940.

To eliminate "enemies of the working class", Stalin instituted the "Great Purge". Over a million people were imprisoned and at least 700,000 executed between 1934 and 1939. Those executed included most of the generals in the Red Army, whom Stalin saw as a threat to his rule. This greatly weakened the army in the early months of the Wehrmacht's offensive against the Soviet Union in 1941. 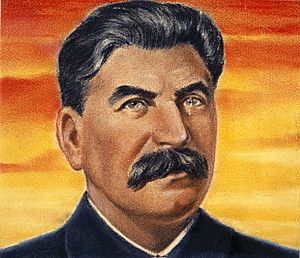 Stalin cooperated with German Nazi leader Adolf Hitler. However, Hitler hated communism. After invading and neutralising France, Germany attacked the Soviet Union. After the Operation Barbarossa invasion, the USSR began working with the Western Allies to defeat Germany. In the end, Germany lost, but the USSR had more casualties than any other country during the war.

When World War II was over, the Soviet army occupied many countries in Europe, such as Poland, Czechoslovakia, Hungary, and part of Germany. They imposed Marxism-Leninism on these countries. This was done against the wishes, and over the protests, of the American and British governments.

Stalin continued to rule over the Soviet Union until he died. He also militarized Russia by focusing the country's time and energy towards weapons, vehicles, and the armed forces.

Stalin died on March 5, 1953. It was officially said to be because of a stroke. In 2003, however, a group of Russian and American historians said that Stalin had been poisoned with powerful rat poison warfarin, possibly by the men who took over the government after Stalin died. Led by Lavrentiy Beria, these were Vyacheslav Molotov and Georgy Malenkov. Nikita Krushchev later began a process called "De-Stalinization", which meant taking apart much of the political system that Stalin made. Stalin was denounced as a tyrant. After outsmarting and defeating his rivals, Krushchev established a personal control over the government comparable to Stalin's own, even if he never went as far in murdering millions of people.

Stalin is a controversial figure in history. Many historians see him as a ruthless dictator, though others praise him as the Father of the Soviet State. He has been criticized for his role in the Holodomor. A recent poll in Russia (2008) listed him as the third most popular person in Russian history. In 2006, a poll stated that almost half the adults in Russia thought Joseph Stalin was a good person.

All content from Kiddle encyclopedia articles (including the article images and facts) can be freely used under Attribution-ShareAlike license, unless stated otherwise. Cite this article:
Joseph Stalin Facts for Kids. Kiddle Encyclopedia.