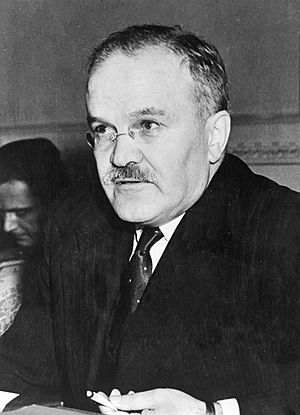 Vyacheslav Mikhailovich Molotov (Russian: Вячесла́в Миха́йлович Мо́лотов; March 9 [O.S. February 25] 1890 – November 8, 1986) was a Soviet politician and diplomat. He was a leading figure in the Soviet government from the 1920s, when he came to power. He was a protégé of Joseph Stalin, until the 1950s. Nikita Khrushchev dismissed him from office. He was the main Soviet signatory of the Molotov-Ribbentrop pact of 1939. This pact was signed between Germany and the USSR, and it was a promise not to attack each other. The pact lasted about two years, until Germany started the invasion of the Soviet Union on June 22, 1941. The Molotov Cocktail, which was invented by Finns fighting against the Soviet invasion of Finland, is named after him.

All content from Kiddle encyclopedia articles (including the article images and facts) can be freely used under Attribution-ShareAlike license, unless stated otherwise. Cite this article:
Vyacheslav Molotov Facts for Kids. Kiddle Encyclopedia.